The Parish of Chipstead lies on a spur of the North Downs that runs north from the main ridge at Reigate Hill. At the top of the spur most of the land is relatively flat with fairly heavy clay soils containing much flint. Intermittently there are sandy patches and the steep sides of the spur have lighter chalk soils. In comparison to other parts of the country Chipstead’s farmland is not especially fertile but it is versatile and this is reflected in its varied use over the years.

Domesday Book records that Chipstead manor had land for seven ploughs. This suggests that in 1086 perhaps 40% of the land was used for growing crops. It is likely that strip farming will have been practised in open fields and pigs will have been kept in the woods. Another snapshot of historical land use is provided by the 1847 Tithe Map which visually demonstrates that at that time over 80% of the farmland was arable. 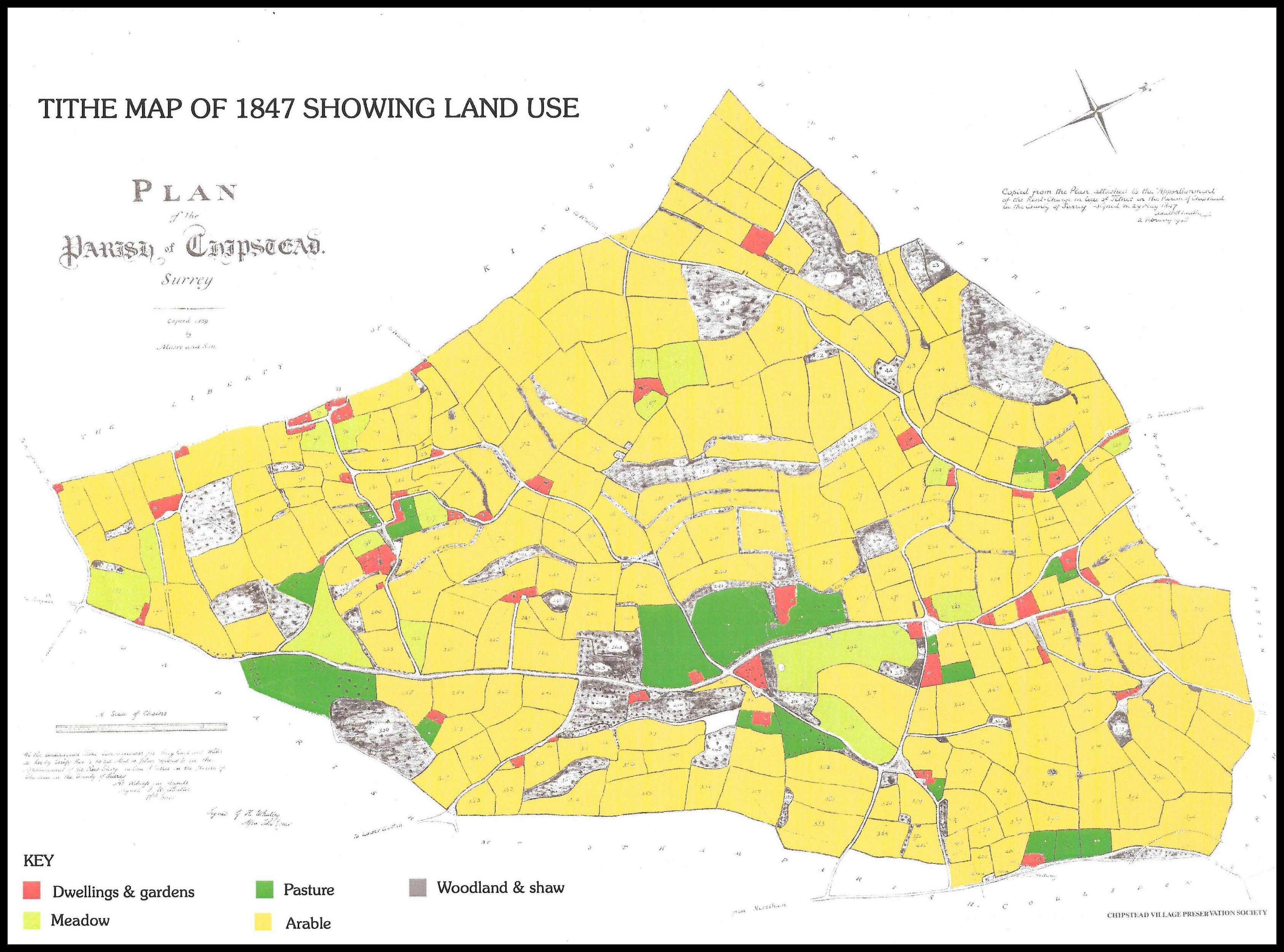 However, these two snapshots are unlikely to be representative of the whole period of Chipstead’s long history and there is evidence to suggests that between 1086 and 1847 sheep farming was a very important activity in the parish. Early Assize Rolls show that in 1253 Alured de Shepinden lived in Shabden and in the 1332 Surrey tax returns there is reference to Waltero de Shepedon and Petro le Shephurde. These names suggest an association with sheep. Sheep are also referred to in a number of medieval wills of Chipstead people for example donations of sheep were made to St. Margaret’s Church by William Tanner (1492), William Best (1529), Thomas Hatcher (1534) and Thomas Best (1538). In the Late Medieval and Tudor periods farming was increasing done for commercial purposes rather than for subsidence. Graham Clark, in his ‘The Price History of English Agriculture’, demonstrates that pastoral farming was far more profitable than arable farming in the 15th and 16th centuries. Then, as now, farmers will have had an eye for profit. The Black Death, that first occurred in 1348 but recurred several times over the next century, led to a sharp fall in grain prices and Chipstead’s farmers will have seen there was more money to be made from England’s flourishing wool exports.

While most of Chipstead’s land was used for arable farming in 1847, this was only a year after the repeal of the Corn Laws. It is likely that after 1847 arable farming in Chipstead declined following the sharp fall in grain prices that resulted from an increase in wheat imports from the continent and later North America. During the 20th century mechanisation resulted in dramatic changes in the economics of farming and arable farming on small farms became unprofitable. Dairy farming became increasingly important and, immediately after World War II, Charles Pringle reports in his History of Chipstead that there were eleven farms in Chipstead - most of them dairy farms. Frances O’Donnells’s ‘Memories of the 20th Century’ describes the gradual decline of dairy farming in the following fifty years. By 1999 there were only two dairy farmers left – Clarence Colebrook at Leyfields and Richard Kent at Crossways. Troubled by Mad Cow Disease and European milk quotas, Clarence Colebrook  moved into fattening beef cattle and in 2019 Richard Kent decided to sell off his remaining dairy cows.

Old farmers would probably be distraught by the current use, or lack of use, of Chipstead’s land. Today only about 8% of the land is used for growing cereal crops, 25% of sheep grazing (mostly on Shabden Farm) and 25% for the essentially non-productive purpose of grazing horses.  Other uses of the land in the Parish of Chipstead include open downland grassland 8% (brown in map), recreational land especially golf clubs 10% (orange in map), woodland 12% (grey in map) and buildings, gardens and unused land 12%.  It is noticeable how much more woodland there is than in 1847 but much of it is poorly maintained. 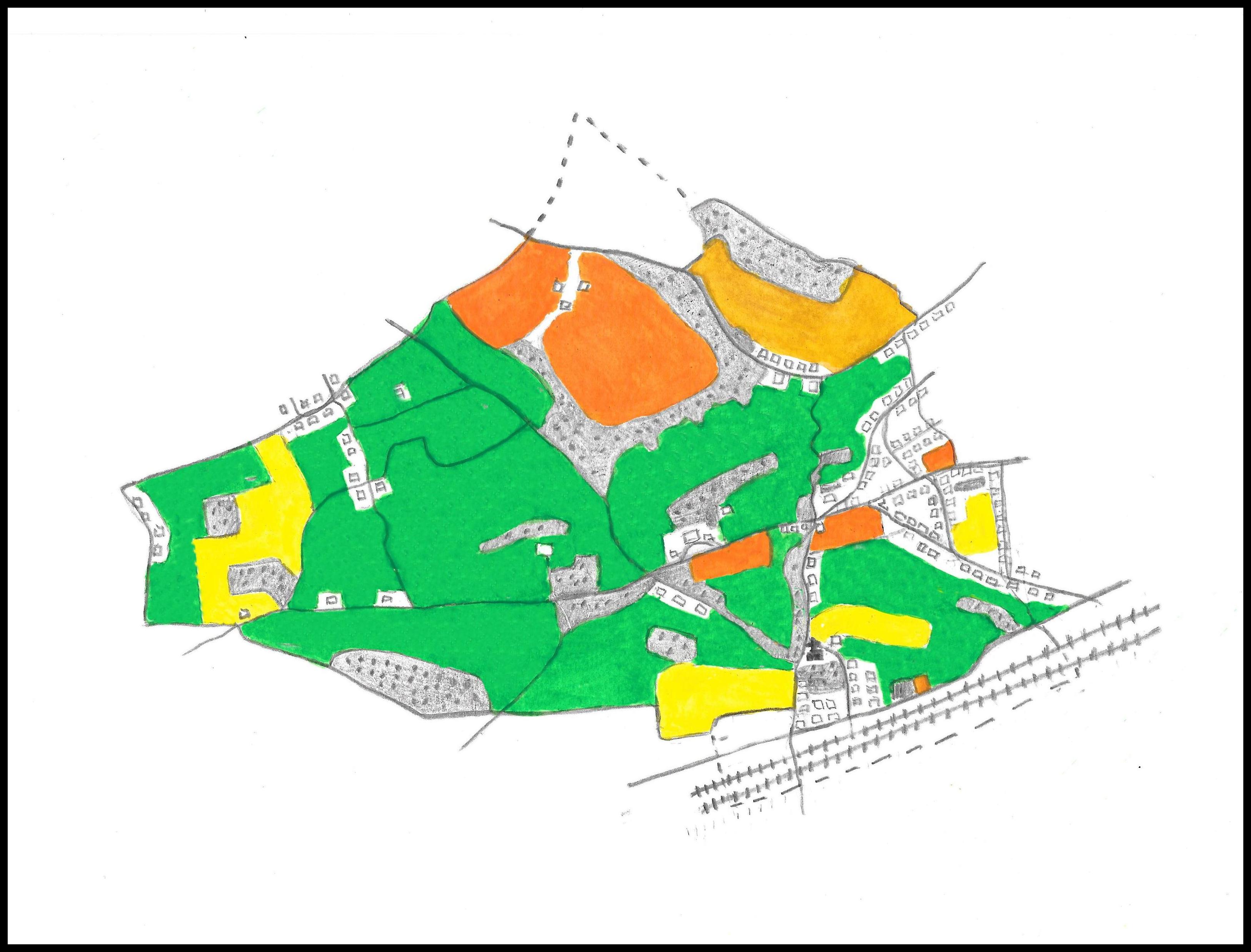 Seeing how landowners respond to Brexit over the next decade will be very interesting. It is possible that food prices will rise and more land is used for food production. More likely perhaps the absence of European subsidies will have the reverse effect. Recent lock-downs have given us renewed interest in the countryside. What happens to local agriculture will have a major impact on the Chipstead environment and the quality of life of its residents.