Professor Trevor Powles is a leading oncologist specialising in the study of breast cancer, with an international reputation in pioneering treatment. Trevor has worked for most of his career at the Royal Marsden Hospital in Sutton, and has lived in Chipstead with his wife Penny for nearly 40 years. 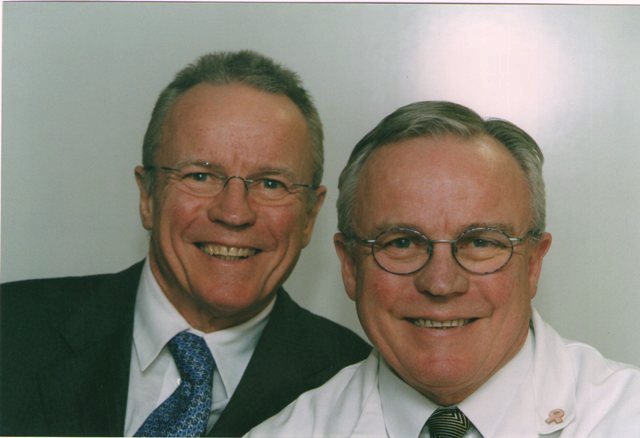 Trevor and his identical twin brother Ray were born in Greenwich in 1938 and then lived in Sidcup during most the war, where they seemed to spend most of their time sheltering from the blitz in an Anderson shelter! Then their father joined the Royal Navy so the twins with their mother and elder brother David were evacuated away from the air raids to “The Priory” in the village of Norton, near Stockton-on-Tees in Yorkshire. There they were the “guests” of a Colonel Brown and his sister, but took all their meals “below stairs” with Doris the housekeeper and Fenwick the gardener. There he particularly enjoyed the village school, where his distinguished academic career began. 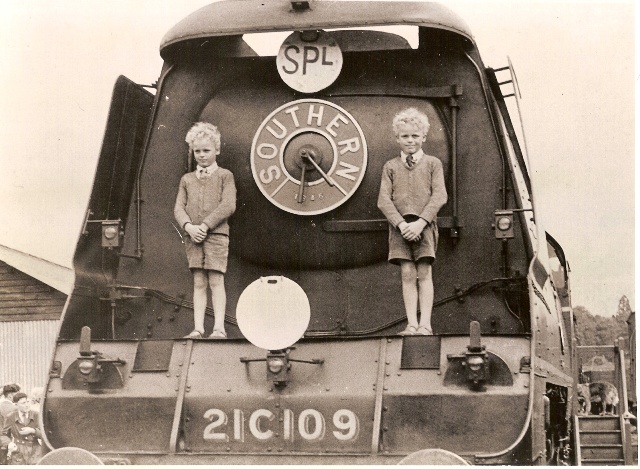 An early photo opportunity on the Southern railway for the twins!

25 years later, Trevor, then a temporary ship’s doctor, found himself at a Tees-side port and decided to revisit “The Priory”. To his amazement and gratification, Doris answered the door, with the words “You’re one of the twins, aren’t you”. The Colonel had died but Miss Brown was still alive, and Trevor had a nice “cuppa below stairs”, before returning to his ship.

The twins left school in 1956 but they were both undecided about which career path to follow. However, fate intervened and life changed rapidly for them both when Ray coughed up a large quantity of blood, and was admitted to a tuberculosis sanatorium on the Thames estuary for 7 months. Trevor was so impressed by the way his brother was treated that he decided to go into medicine, and got a place at St. Bartholomew's Hospital (Barts) in the City of London. He was just about to start there when it was found that he too had developed TB. Almost as Ray left the sanatorium, Trevor went in. 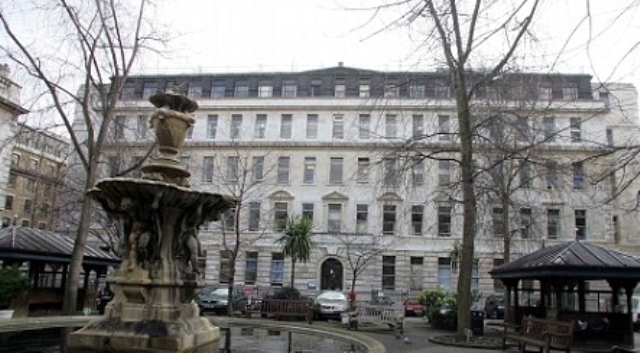 The historic Square and fountain at St. Bartholomew's Hospital, London, founded in 1123

Finally, Ray also decided to study medicine and so they both entered the Medical School at Barts a year later, where, needless to say, they both flourished, both on and off the rugby pitch!

However, the Powles life is never uneventful and in 1961, after a particularly punishing game of rugby against the Metropolitan Police, Trevor noticed that he was passing blood and sadly he ended up having his injured kidney removed at Barts. Undeterred, Trevor carried on and qualified with Ray in 1964.

During their post-qualification training doing “house jobs” at Barts, they both decided to study aspects of oncology. It was at this point that their careers diverged temporarily. Trevor went to the Hammersmith Hospital where he passed the MRCP. He then started his specialist training in endocrinology (the study of hormones) at Barts together with oncology (the study of malignant tumours) at the Royal Marsden.

Trevor then decided to have a “year off” for general experience in which he did 6 months as a locum GP, and the rest at sea as a ship’s doctor. He admits he did not broadcast his experiences at sea, as he had been warned by one of his former mentors that it would be looked upon as “professional suicide”, which proved to be far from the truth in Trevor`s case!  It was during a voyage to South Africa that Trevor met Penny, his wife to be. It was in Durban through a contact of Ray`s that he first met her at a dinner party.

Trevor finished his stint on the boats and then went back to the Royal Marsden to complete his post graduate clinical training. By then he had met up again with Penny, who had come on a visit to England and they got engaged before she had to go back to South Africa.  After some agonising months for Trevor, he flew out for the wedding in Durban in 1968. None of this suggests that his time at sea had been anything but a great success. 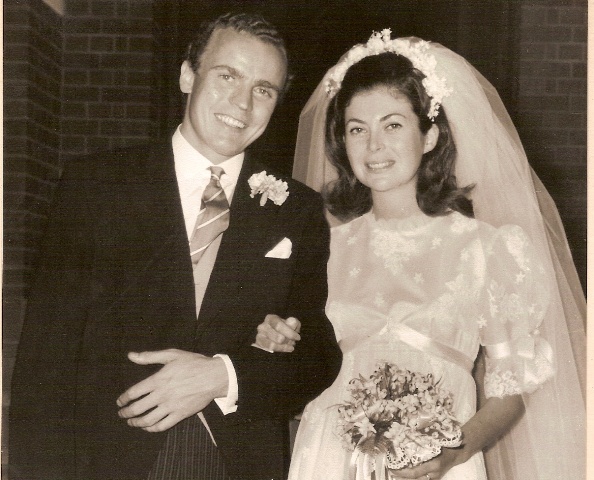 Trevor and Penny on their wedding day in Durban, South Africa, in 1968

Trevor went on to do a PhD. in molecular pathology at the Institute of Cancer Research, attached to the Royal Marsden in Chelsea. In 1974 he was appointed as a consultant physician in breast cancer at the Royal Marsden in Sutton and it was during one lunch break that he came across Chipstead and “fell in love with it”, as did Penny. At this time they had two sons, James (5) and Tom (3), with Lucy due in 3 months, but in spite of this Penny found a house in Chipstead, which they describe as being semi derelict then. They still live there now and it is in anything but a derelict state, and Penny has created a beautiful garden there. Interestingly, Ray had also been appointed as a consultant oncological haematologist at the Marsden, and lives in Banstead. 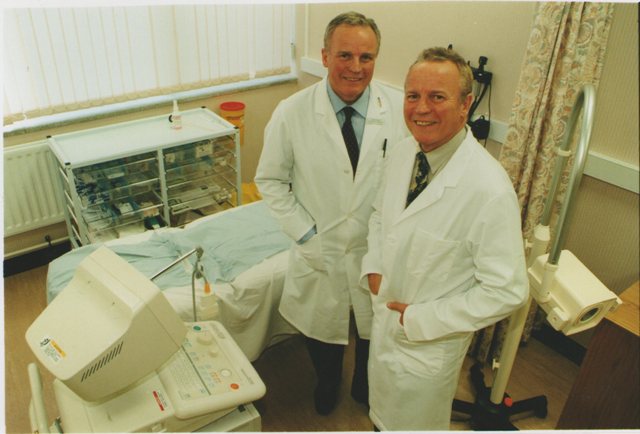 Trevor has had a very distinguished career at the Sutton Marsden, dedicated to patients with breast cancer, both “hands on” clinical care and research. He has treated thousands of women, both from the local community and also from overseas, where he has an international reputation, having published and lectured widely throughout the world. He has won many awards in America and Europe, and here at home was made a CBE in 2002 with his brother Ray who has had an equally successful career in blood malignancies. 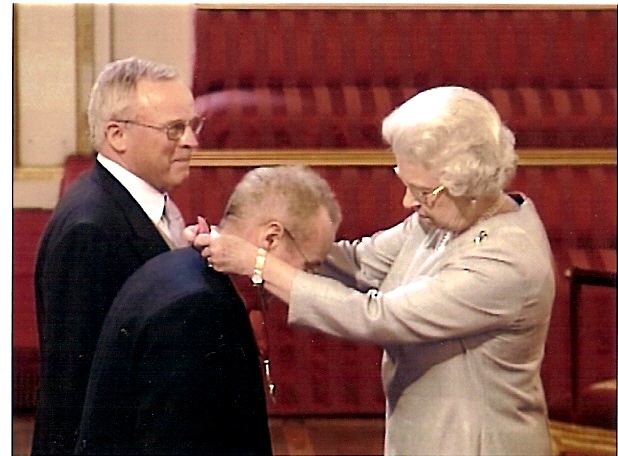 At this time Trevor, Ray and their families were all featured in a memorable episode of “This is Your Life” at Teddington Studios. 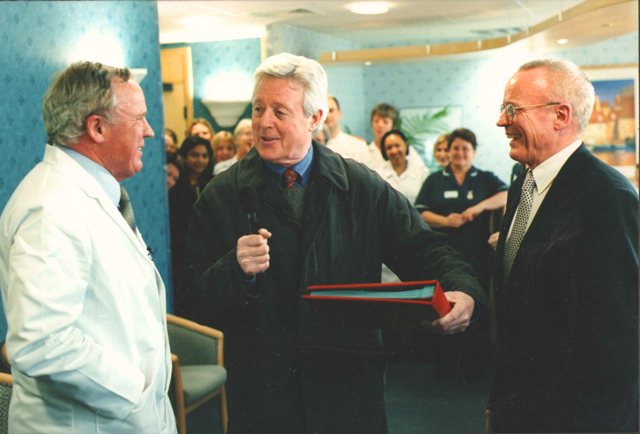 Trevor (left) and Ray are astonished by the sudden appearance of Michael Aspel carrying a "This Is Your Life" folder at the Sutton Marsden hospital before being driven in style to the Teddington TV Studios!

Trevor`s main research projects have been in the long term effects of Tamoxifen, a drug to prevent cancer recurrence, and more recently the use of bisphosphonates in the prevention and a treatment for bone secondaries. These are perhaps better known outside the medical community as a treatment for osteoporosis.

Trevor was made a professor in 1990 and head of the breast cancer unit at the Institute of Cancer Research. He has now retired from the NHS and the Royal Marsden, but continues to practise privately at various London venues, particularly at the Cancer Centre at Parkside Hospital, Wimbledon, where he is the Medical Director. He shows no sign of retiring completely! 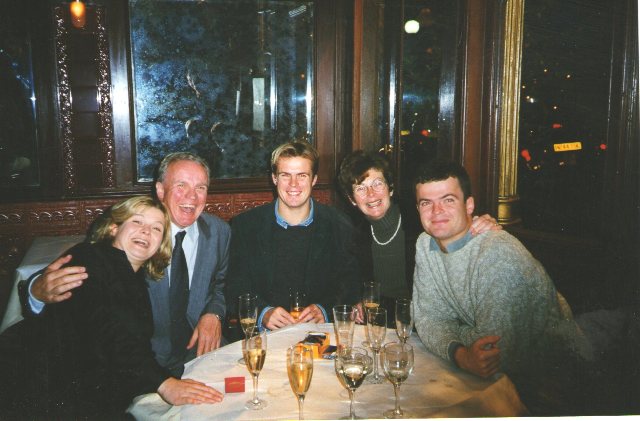 Trevor and his family celebrating his appointment as a medical Professor in 1990.

From the left – Lucy, Trevor, James, Penny and Tom

Trevor has always had a very full life away from medicine and he is a great family man. Both James and Tom followed him into medicine, and also Lucy shares with him the love of cross country horse riding. He has always had his own horses, kept in Mugswell until recently, and spent many happy hours hunting and long distance trekking with Lucy. 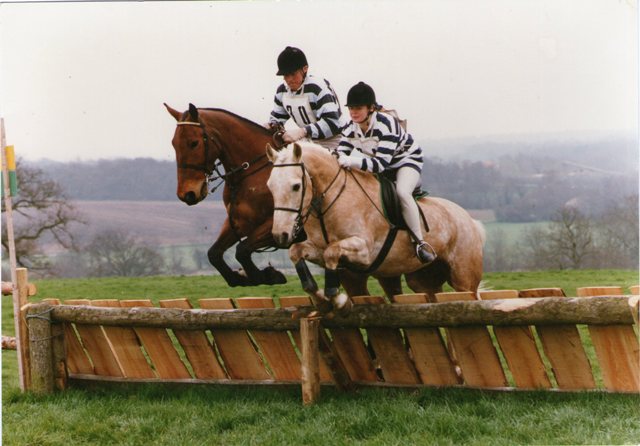 Trevor and Lucy at the jumps near Chipstead

During the Great Storm of 1987 Lucy and Trevor had to walk and climb over hundreds of fallen trees to reach the horses and check they were safe and sound. They took over 6 hours to get to Mugswell and back!

Penny has been an enormous support to Trevor in both good times and bad, and at the same time has taken a great interest in Chipstead life. She studied fine art at the University of Natal and has become an excellent painter, regularly exhibiting at the Tadworth Art Group. She has also become an expert in interior design, which she has developed commercially.

Trevor and Penny still go skiing with the family, and they now both spend much time down in their new cottage in Devon, near where James is an ENT surgeon. They also spend time going to London to see Tom, now also a professor of oncology at Barts, and Lucy, an interior designer, with her own company "Coco Vara"

Trevor, who is a member of St Margaret’s Church, says that he is especially blessed for his family, his career and living in Chipstead, where he has always found great pleasure and friendship. He added, as an afterthought, that he still feels very indebted to his village school in wartime Yorkshire, which set him on the right track!