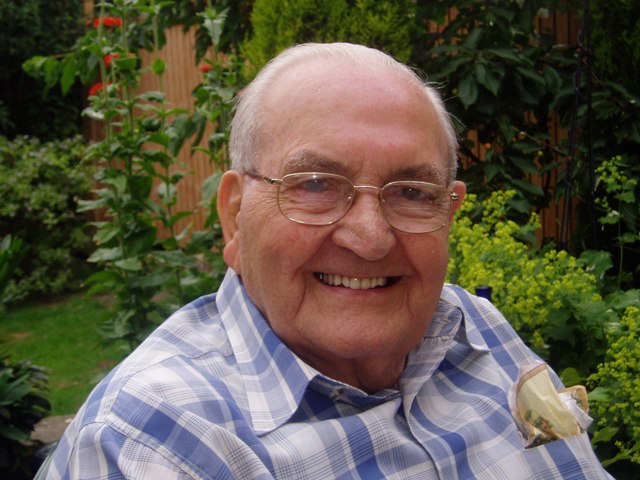 Many of us living in Chipstead will remember Mr and Mrs Bradshaw and their shop on High Road, with great affection. Then one of 3 shops, the others being a grocer/off licence and a post-office/newsagents, all have closed, not to re-open. A quarter of a century ago, the roads of the village were much more attractive to pedestrians, both with and without prams or pushchairs; the traffic being less numerous, slower and comprising smaller vehicles. Of course the other factor was the opening of several local supermarkets.

Mr Bradshaw was the third child of Mr & Mrs Harry Bradshaw of Coulsdon, a Master Builder.  They lived on a smallholding in Wallington, and he very much enjoyed tending the animals.  He was a keen tennis player and footballer, and enjoyed his car, driving from the age of 16 to 90, with an unblemished record.

During the 2nd World War he served in the Forces first in London, where he was incapacitated, and subsequently transferred to Yorkshire where he met his wife Doreen, who was serving in the Army Pay Office in Leeds.  They married in 1947 and moved back to Surrey.

He bought a van with his £80 demob money, obtained a Hawker’s Licence and set up as a Greengrocer.  Mrs Butcher, who owned the Newsagents in Chipstead High Road, rented him the land next door, now the site of a small house, where he set up a wooden garage, which was known locally as “the little shop”, in 1952. Another shop was built on the other side of the newsagents, and Mr. Bradshaw moved there in 1959 where he ran his expanding business, selling fruit, vegetables, flowers, plants, garden equipment, and sundry essentials such as light bulbs.  He would deliver to customers if required. 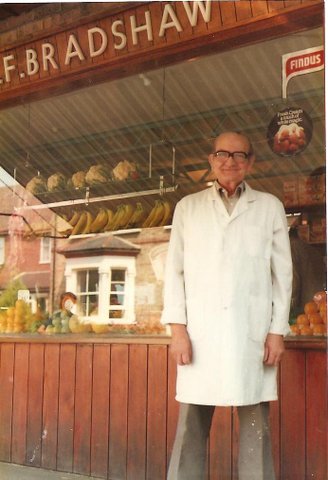 Jim Bradshaw on the day of his retirement in1983

He and his family took an active part in village life and he always had a stand at the Flower Show. On his retirement in 1983, he had a surprise farewell party given by Colin and Wendy Vaughan, and then moved to Yorkshire to be near the rest of the family; there he continued to grow vegetables and enjoy his retirement.  Doreen sadly died in 1996, and Mr Bradshaw found this very difficult to cope with, but developed his interest in history and sport, and was immensely supported by the company of his children, grandchildren and great grandchildren. He was particularly looking forward to the Jubilee and the Olympics when he sadly caught pneumonia and died suddenly in February this year, aged 95. Our sincerest condolences go out to his family.

Adapted from notes kindly provided by Susan Mulhern, his daughter, by Pat Courtenay-Evans.