Mrs. Nichols was born in 1872 and was interviewed by W.G.Tharby of the Bourne Society in 1962. Her account spans the late Victorian period and the early 20th century, during which she lived at a number of addresses in Coulsdon and Chipstead.

Her father was a platelayer on the railway and was involved in the construction of the Tattenham Corner railway in 1886/87. Here is her story:

I was born in a cottage in Hooley Lane (now A23 Brighton Road), Coulsdon, at a turn in the old turnpike road, in July, 1872. It was one of a pair owned by the South Eastern Railway Company, situated about 150 yards south of where Woodplace Lane turns off the main road (opposite Hollymeoak Road). The cottages were set at right angles to the main road, facing south towards the Star Inn. There was a bakehouse at the rear of the house where mother baked all the bread for our family. 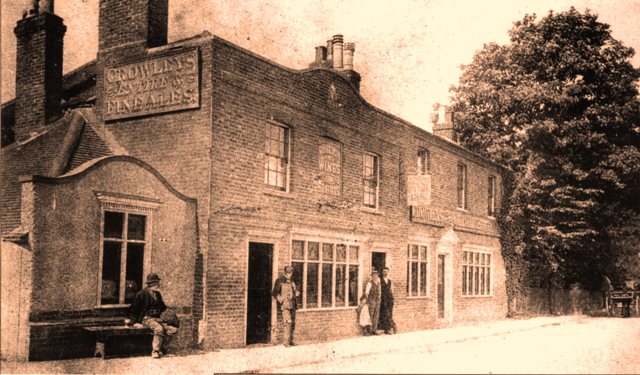 The former Star Inn on the Brighton Road, Hooley in 1905

My father’s pay was 18/-per week, raised to 22/- when he was promoted ganger.  In those days attendance at school was not compulsory, and when I and my brothers and sisters went it was to St. John's School, Bradmore Green, where Mr. and Mrs. Cole were in charge. We used to walk up to the Star, turn left over the railway bridge, through lanes, and across Farthing Down, then more lanes. We also had this walk when I and my sisters attended St. John's Church for Sunday School, and also on weekdays for the Girls Friendly Society and the Blue Ribboners. 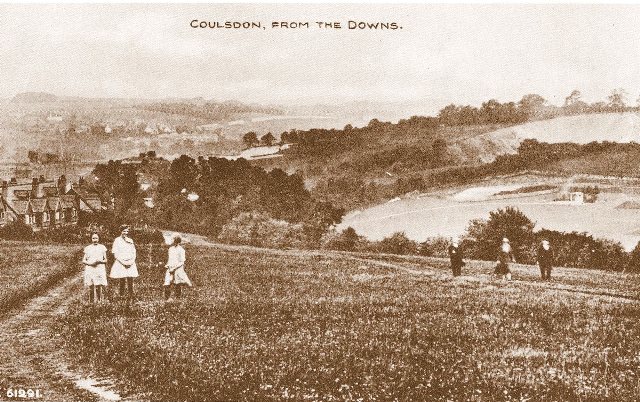 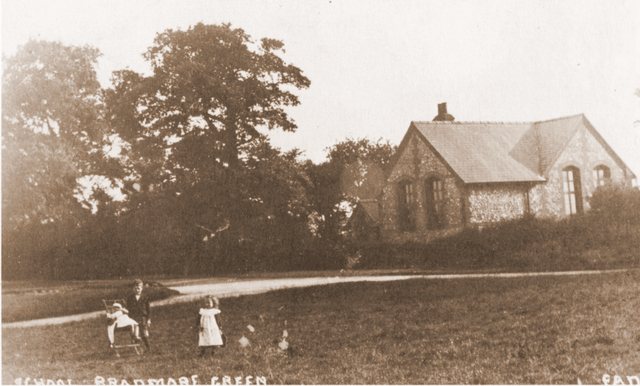 Later I remember going to Sunday School in a tin hut situated where the Comrades Club now stands (on the Brighton Road in the centre of Coulsdon). Coulsdon Cricket was played on the waste land at Lion Green. When we got any pocket money it was usually a farthing, and during school mid-day break we would go down Coulsdon Street, to Mr. Weston's baker's shop to buy either a liquorice strip or a sugar stick. If our money was more we sometimes bought a happ'orth of bread.

The postman did not come to our house and one of us would walk up to the bridge opposite the Star to collect any letters from him. We only had a newspaper on Sundays, when a man delivered Lloyds Sunday News. 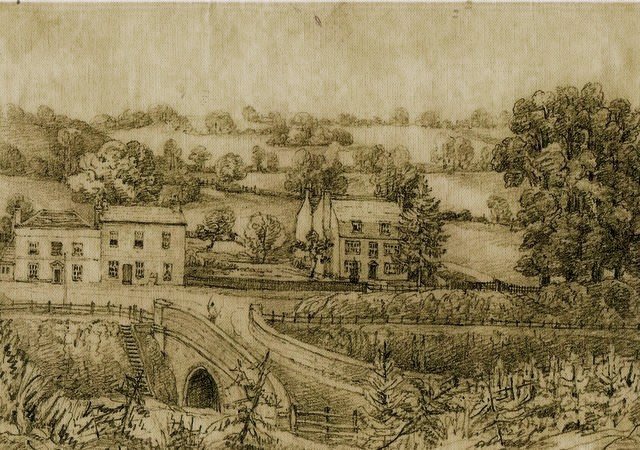 The two cottages did not have a water supply and mother used to put a wooden yoke over her shoulders, suspend a pail each side and go to the well at Well Cottage for our water.  Well Cottage is still there, nearly opposite the bridge over the railway leading to Woodplace Lane. A pond used to be on the corner where Hollymeoake Road joined the main road, and I remember when a man living in nearby Stoney Cottages fell down this well, but he was pulled out not much the worse. 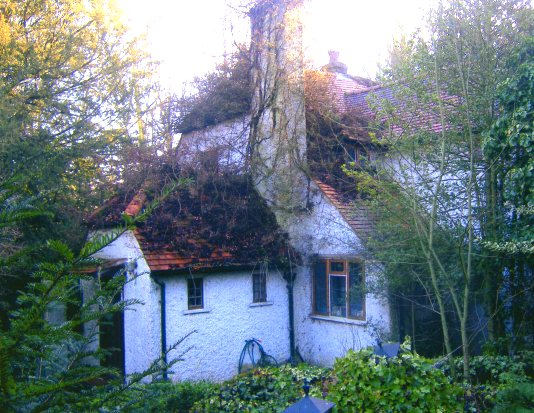 Well cottage at the bottom of Hollymeoak Road in 2008

We children used to wait by the side of the main road for the London and Brighton stage coaches—"The Age", 'The Comet" and "Old Times" to pass, when we called out "throw out your mouldy coppers". One gentleman thought he was tossing down a halfpenny, but it turned out to be a golden sovereign.

We were often awakened by the passing of the night post office mail vans about 3.0 a.m. The G.P.O. decided in 1887 that parcel mail between London and Brighton could be conveyed cheaper by road, and introduced the horsed mail with great ceremony on June 1st of that year. They used Moses James Nobbs as guard on this occasion. He had started in this capacity in 1836 and was now over 70. It was reported he could not blow his horn properly for as his teeth had been drawn by “time, the thief".  Driver and guard were armed with heavy calibre revolvers. They met at the Chequers Hotel, Horley, at 12.55 a.m., where horses were changed over, the van from London going on to Brighton and the Brighton one back to London. They were four horsed and carried up to 12 cwt. of mail. The last horsed mail ran June 1st, 1905.

The road in those days was only narrow, with a surface of flints, and very dusty in dry weather. Little traffic passed, just an occasional carriage or farm cart, with cyclists on Sundays.   We used to walk to Doghurst Lane, Chipstead, to get our butter and milk from a farm (probably Hazelwood Farm). Butter 6d. a pound and milk Id. a pint. Skim milk free. 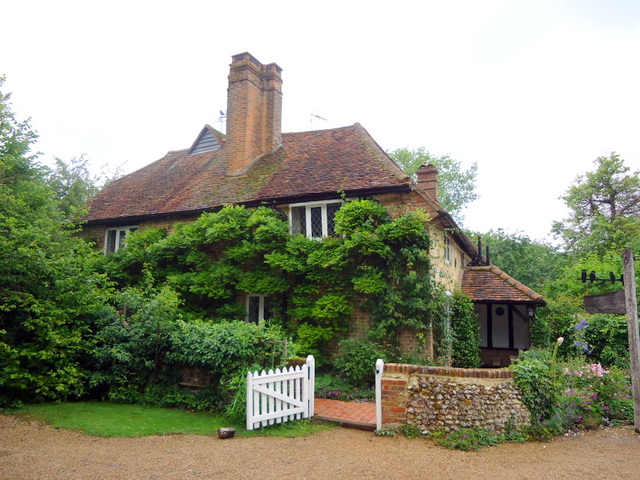 Mother often walked to Croydon to shop, pushing a perambulator with wooden wheels and iron tyres, and I often went too. We got our meat from Joyce at Merstham. There were only about six shops in what is now called Coulsdon, but which was then known as Smitham Bottom. They were all in old cottages converted to shops. The nearest station was Caterham Junction.  If we ran short of groceries we walked to a shop in High Road, Chipstead. Hock bacon was per pound 3d, margarine 3d. or 4d., dust tea 1/-, sand sugar Id., gran sugar 1& 1/2d, cheese 4& 1/2d. to 6d., rump steak 1/-, coal delivered by Mogers 11d . a cwt. and 17/6d  per ton.

When my sister Maud was born on the 28th April, 1889, the doctor, who came from Kenley, called in at Coulsdon Station on his way home to tell my father he had a fine fat daughter, and this happened to be the very day that this station was first opened, then known as “Coulsdon Station”, today it is called “Coulsdon South”. 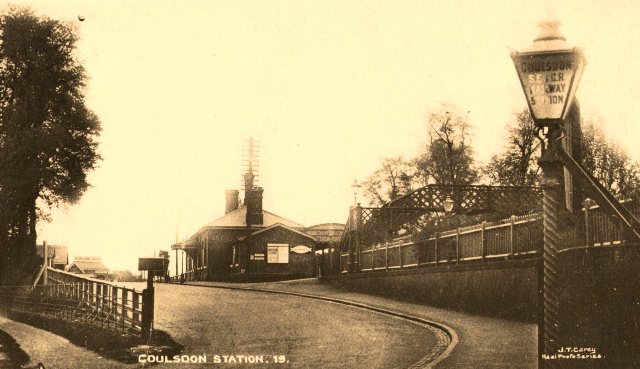 Mr. Tucker had a farm at the top of Rickman Hill (Portnalls Road, which later became part of the Cane Hill Hospital estate owned by the LCC) and I can remember Cane Hill Asylum being built in 1883. He had had “Rickman Hill” made into a road, with holly trees planted each side (1873).

His daughters were very good in visiting the poor. They used to keep what they called their “lying in” baskets which they loaned to mothers when a new baby arrived. They contained two sheets, two nightdresses, baby clothes, etc. The first two days they took the mother gruel, then broth until the seventh day, then a chop. When the basket was returned with the things washed and ironed, they took a present for the baby.

Every Christmas, Squire “Nobby” Byron of Coulsdon Court, last Lord of the Manor of Coulsdon, used to distribute presents of blankets and flannel to poor families and about February he gave peck loaves of bread.  This was called “Smith's Gifts”.

When construction of the railway between Purley and Tattenham Corner was commenced, my father was made ganger in charge, with over 100 men under him, and to be nearer his work he moved to a house in Chipstead Valley Road, nearly opposite where the present G.P.O. stands. It was one of a row named Banks Villas. This would be about 1896, and in any case we should have had to get out of the other cottage as the pair were pulled down when the L.B. & S.C. Railway made their Quarry Line in about 1900.

About where the Elim Church now stands were two old posts, at the side of the  road, and people said they were the remains of a gate which was  across the road. The remains of the embankment of the old Merstham Tramway (Surrey Iron Railway) were on each side of the road at this spot, and we children used to have fun sliding down its steep sides. I remember my grandfather telling dad about the Merstham Tramway (the Croydon, Merstham & Godstone Iron Railway which ran from 1803 till 1839), and the trains pulled by horses between Merstham and Croydon, and the old cutting near Alderstead Lane, which is now Dean Lane. 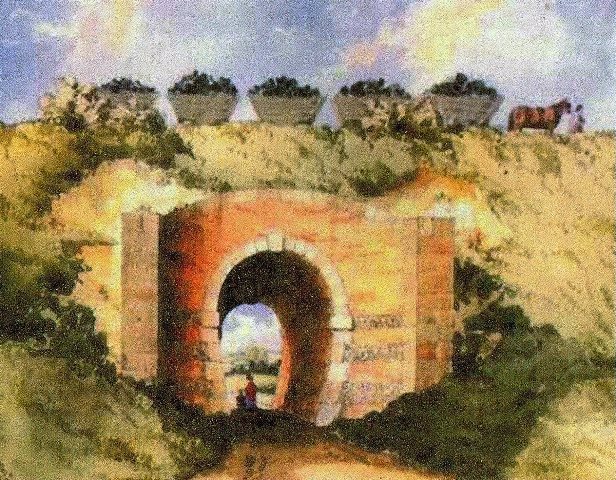 The former Surrey Iron Railway bridge over Chipstead Valley Road, near the current Post Office, c1820. This horse drawn plate railway was mainly used for transporting cut stone from the Merstham quarries to the Thames for transhipment on river barges. The embankments still exist.

At this time the post office was in Carey's grocers shop, situated about where the Vic Wireless shop is today; then they moved to the corner site opposite the Red Lion, now the National Provincial Bank. The mother of Ern Hawkins, the Chipstead butcher, had the shop next to the undertakers by the G.P.O. and he used to kill people's pigs for them, at the back of the shop. My father kept pigs, and so did I after I married. In fact a lot of people did then. Old Mrs. Hawkins was clever with herbal remedies and the villagers all swore by her ointment for skin troubles.

Following the railway along the valley, our next move was to a cottage on the site now occupied by the two modern bungalows behind Harmer's Garage.(site now of the Coulsdon Community Club in Barry Close) There were two cottages, one thatched and one slated, and ours was the latter. All that remains now is a yew tree.

After that father moved to the very old house known as Rumbold’s Castle, situated near the railway viaduct in Outwood Lane, between Chipstead and Kingswood. It was formerly an inn, and has a large stone floored cellar and a very large larder. There were fox hound kennels nearby and Father looked after the hounds. 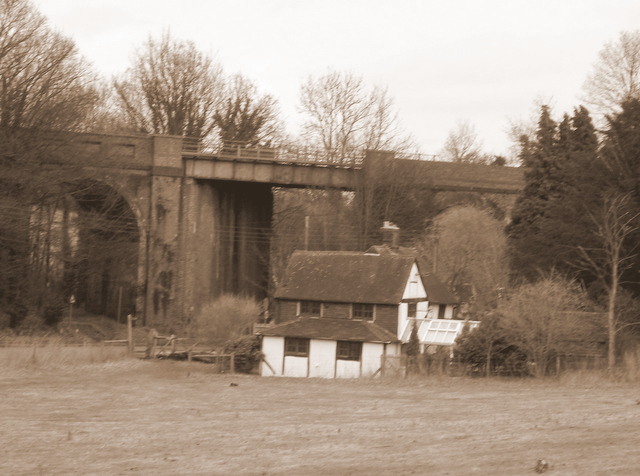 Rumbold’s Castle Cottage, near the railway viaduct on Outwood Lane

When the line was opened in 1898 Father rode from Purley on the footplate of the engine with Sir Henry Cosmo Bonser, who had a lot to do with getting the line made. On arrival he handed Father some golden sovereigns.

Fifty years ago (1912), my husband and I moved into the house in Chipstead Valley Road where I still reside, only then it was known as Chipstead Bottom. I remember that about this time a terrace house nearly opposite Portnalls Road corner was sold for £75.

When I first knew Chipstead Valley, the road was only a narrow lane, with rough flint surface and no lighting. The only traffic was an occasional farm wagon or flock of sheep.  Even fifty years ago we could watch a Stag Hunt in the fields at the back of our house and  also Hare Hunts. The fields, where Richmond and Alexander Roads are now, (on “The Mount” above the site of the present Woodmansterne Station, which was not built until 1932), always used to have lots of poppies and looked very pretty.

Speaking of poppies reminds me that until quite recently I sold poppies on Armistice Day, and Alexandra Roses from the start in 1912.  In 1935, on the Silver Jubilee of King George V, the Duchess of Kent pinned on my coat a spray of roses and also gave me a brooch. Until last year (1961) I also collected for the Coulsdon “Over Sixty Club” Christmas tea and presents.

This article was adapted from the Bourne Society`s “Local History Records”- Book 2-1963.