A branch of the important Walpole family lived at Stagbury on Outwood Lane during the nineteenth century. Their influence over Chipstead lasts until today.

In the 18th and 19th centuries the Walpoles were one of England’s most influential families. Sir Robert Walpole (1676-1745) was the country’s first prime minister serving George II for over twenty years. George II rewarded him by making him the  1st Earl of Orford; Robert rewarded himself by accumulating great wealth and using a portion of it to rebuild Houghton Hall in Norfolk. Sir Robert’s son, Horace Walpole (1717-1797) is also famous. Horace, a politician, writer and thought leader, built Strawberry Hill in Twickenham in a Gothic-revival style a century before Neo-gothic was ‘discovered’ by the Victorians. 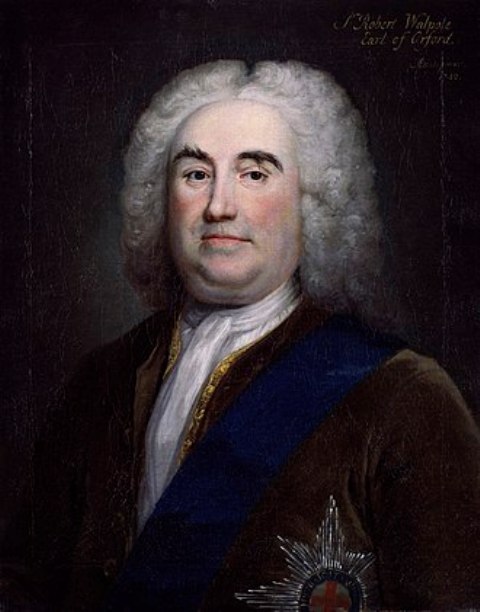 Robert Walpole, 1st Earl of Orford, known between 1721 and 1742 as Sir Robert Walpole, is  generally regarded as the first Prime Minister of Great Britain. He holds the record as the longest serving British prime minister in history, in office for a period of over 20 years.

Other than Sir Robert and Horace, there were many other Walpoles who held important political and military positions. One of these was Sir Robert’s nephew Thomas.  Thomas Walpole (1727 -1803) was a director of the East India Company and a very influential politician before his career collapsed following a financial scandal causing him to sell his house in Carshalton, Surrey. Perhaps it was his childhood love of North-east Surrey that led to his son, another Thomas (1755 -1840), choosing Chipstead as a place to build his home when he built Stagbury (named no doubt after the deer in nearby Banstead Woods) on the road now known as Outwood Lane, close to its junction with Hazelwood Lane. Other than the very hazy old photograph below, we have little information about the house despite it surviving until about 1972. 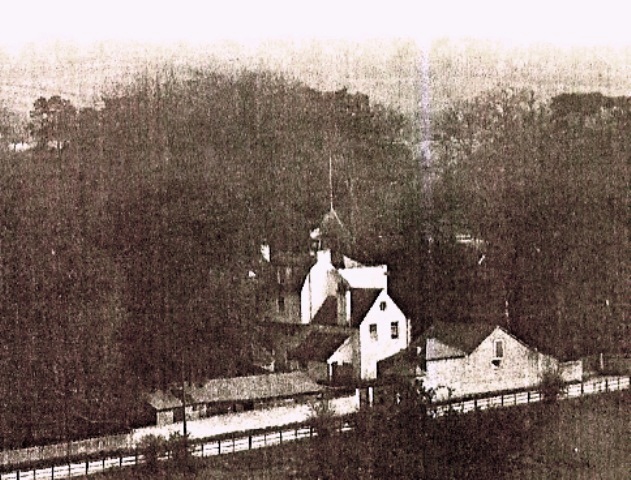 The former “Stagbury” on Outwood Lane, now demolished and replaced in the 1970s by a close of town houses. The glorious cedar trees formerly in the rear garden of Stagbury have survived.

Little is known about Thomas other than he was an M.P. and, for a period, our ambassador to Bavaria. He married Margaret who outlived him by 14 years. Margaret’s brother was Spencer Percival, the only British Prime Minister to be assassinated. Thomas died in 1840 and it is  Margaret who, in the 1847 Tithe Map of the Parish of Chipstead, is shown as owning two acres of land around Stagbury as well as the 22 acre Doggett’s Farm (later called Dog House and later still Doghurst Farm) on the hill behind it. However, this understates her land holdings as, in the adjoining Parish of Woodmanstearne, she owned another 46 acres of land, including Latchford’s Farm. 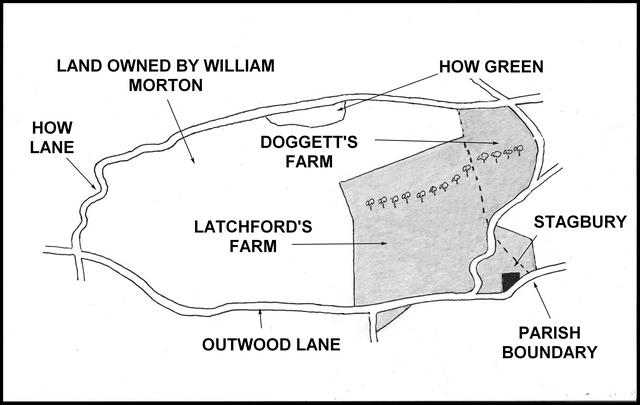 The Walpole land holdings prior to development

Both Thomas and Margaret are buried in St. Margret’s churchyard Chipstead, commemorated by a once fine memorial which remains today. They had five children; the eldest male was yet another Thomas (1805 – 1881). This Thomas took the cloth and was Rector of St. Mary’s, Alverstoke in Hampshire where he is buried.  It seems doubtful that he would have spent long in Chipstead but the family retained Stagbury and his eldest son, a barrister named Henry Spencer Walpole (1837 – 1913), and his wife, Frances Selina (nee Bourke), lived there although they also had property in London. In 1892 Henry Spencer assumed, by Royal License, the additional surname Vade. It was to be Henry Vade-Walpole and his wife who were to benefit from property development in Chipstead - the catalyst for this was the new Tattenham Corner railway line.

In 1891 the M.P. for Kingswood, Sir Henry Cosmo Bonsor, decided to promote the extension of the Epsom Downs branch of the London, Brighton and South Coast Railway to Kingswood. The route was bitterly contested and an alternative idea for a line from Purley through the Chipstead Valley evolved. Within months of the news that the railway was coming land values in the area rose from £25 to £40 an acre. It was noted that ‘the residents of this hitherto benighted part of Surrey were looking forward to a boom beside which the Klondike will pale into insignificance’. In November 1897 the line from Purley to Kingswood was finished with ‘Chipstead and Banstead Downs’ its only intermediate station (the line was extended to Tattenham Corner in 1901). The Walpoles and their neighbours, sold off a small amount of their land to the South East Railway (indeed the line passed within 100 yards of Stagbury). The real money-spinner was however to be houses and over the next three decades the Walpoles sold off nearly all of the rest of their land for residential property development. 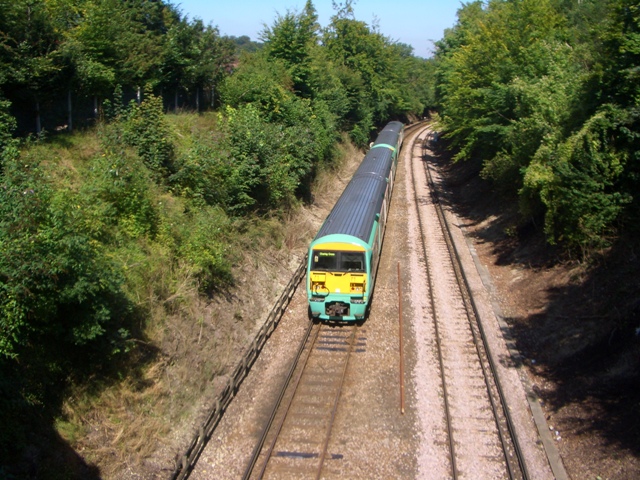 A London bound Tattenham Corner train cutting through the former Walpole estate below Hazelwood Lane in 2007.

Part of the attraction of Chipstead for wealthy Londoners relocating to the area was the opening in 1906 of How Hills Golf Club (later to be renamed Chipstead Golf Club). The golf club was mostly built on land acquired by a lady called Matilda Pine-Coffin from Edward Martin (of Nonsuch Park Farm, Ewell). However, about five acres of golf club land was (and indeed still is) leased from the Walpoles.

The Walpole's sold most of the land of Latchford's Farm in a number of seperate transactions. First about 3 acres of land directly alongside the railway was sold in 1905 to William Adams and The Rookery was probably soon built.

Most of the rest of Latchfords was sold in 1916 (by Horatio Walpole to whom it had been given in 1914). Building on this second tranche did not commence until 1931.At that time H Bacon, a Coulsdon builder, acquired the land and started to build the first few houses in Stagbury Avenue (those with the green tiled roofs).

Stagbury's gardens seem to have been developed in the 1920s when the houses comprising Old Oak Avenue and Stagbury Close were built together with those fronting Outwood Lane. 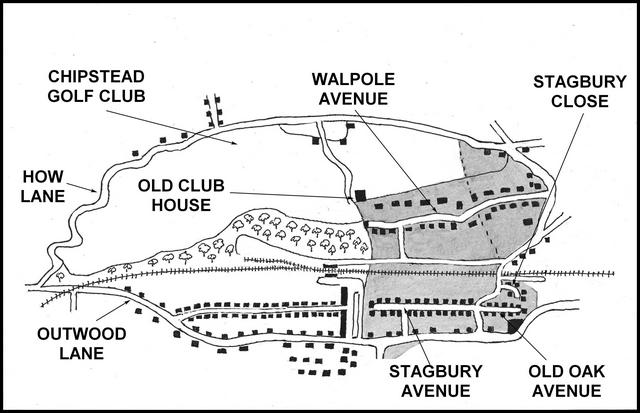 The development of the Walpole Estate was probably conceived by Henry Spencer before his death in 1913. However, the plan was largely executed by his wife, Frances Selina Vade-Walpole, between 1913 and 1924 and after her death by her grandson and her executors. The Walpoles had probably made a ‘strategic withdrawal’ from Chipstead long before. In 1905 a conveyance shows Henry Walope using 101 Lexham Gardens Kennsington as his main address. In the 1911 census Henry Spencer and Frances Selina are shown as living in Lexham Gardens although they still owned Stagbury and a dozen servants are recorded as living there. After the war Frances Selina is shown as living in Montpelier Square, Knightsbridge.

Distancing themselves from Chipstead is understandable as the Walpoles probably no longer had a great emotional attachment to the area. Stagbury was old and encroached by the new railway. Frances Selina’s views are also likely to have been influenced by the fact that both of her sons (Horatio and Thomas) were killed in the First World War. It seems likely that she will have wanted to forget the area in which they had spent their childhoods. It is probably just as well that she never knew that the stained-glass window she had installed in the North Aisle of St. Margaret’s Church  to commemorate the deaths of her sons was badly damaged by bombing in the Second World War. It was restored afterawrds. 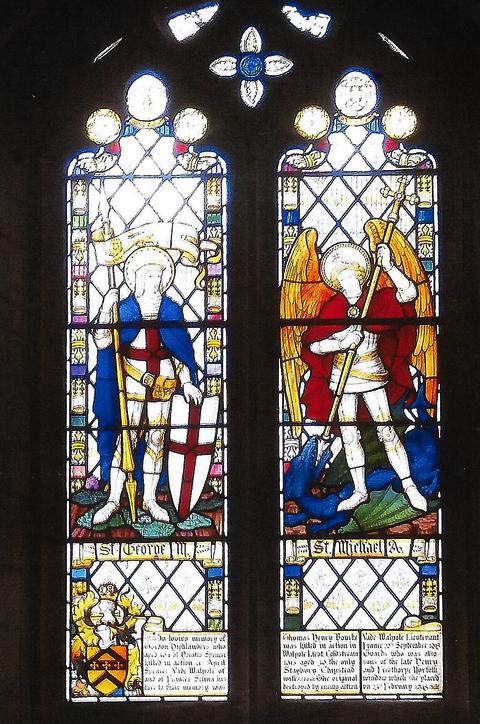 The memorial window to the Walpole family in St. Margaret’s Church, a replacement of the original window destroyed in an air raid in World War 2. The dedication reads:

“In loving memory of Thomas Henry Bourke Vade-Walpole, Lieutenant of the 10th Btn Gordon Highlanders, who was killed in action at Loos in France on 15th September 1915 aged 30 and of Horatio Spencer Walpole, Lieut. 1st Btn Coldstream Guards who was also killed in action during the German Spring Offensive on 9th April 1918 aged 36.They were the only sons of the late Henry Spencer Vade-Walpole of Stagbury, Chipstead and Freethorpe, Norfolk and of Frances Selina his wife.The original window which was placed here to their memory was destroyed by enemy action on 23rd February 1945.”

Both Henry and Frances Selina were burried in the St. Margaret's churchyard. The Walpole line was not lost in the First World War - indeed there is still a Baron Walpole living in Norfolk. Henry Spencer and Frances Selina’s elder son, Horatio Spencer, had married Dorothea before the outbreak of war. Horatio and Dorothea were living in Stevenage and had a son, Robert Henry (1913 – 1989). After the war Dorothea and her young son moved to the imposing Wolterton Hall in Norfolk.  Stagbury was probably sold soon after the war ended. By 1940 it had been converted into flats and in 1972 it was demolished and a small development of townhouses (called Stagbury House) was built on its site.

In hindsight I think Chipstead can be grateful to the Walpole family. After the arrival of the railway the rapid expansion of the previously small rural community of Chipstead was inevitable. The Walpoles strongly influenced the style of much of that that development. They sold their land in a way that resulted in large houses with extensive gardens being built on it and this approach was mimicked by other developers such as in Hollymead Road and Coulsdon Lane.  In a way Walpole Avenue acts as a more fitting memorial to the family than the sadly neglected family memorial in the St. Margaret’s churchyard. 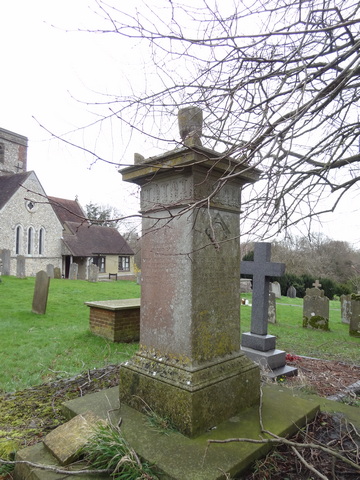