Rupert and his wife Pat have lived in Chipstead for almost 50 years. They have brought up five children in the village and been actively involved in St. Margaret’s Church as well as many other aspects of the village community. 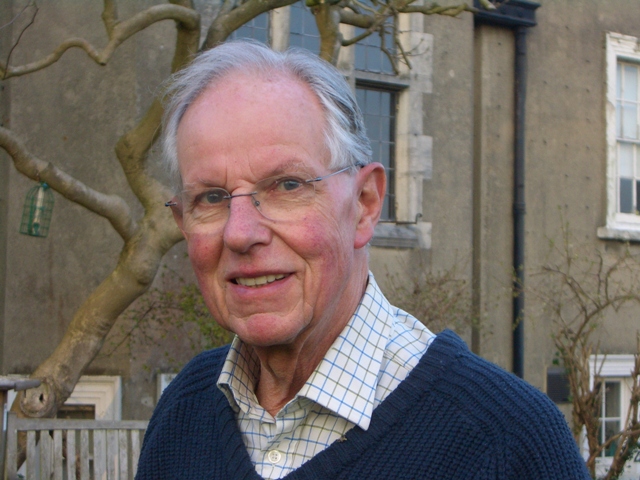 Rupert and his wife Pat have lived in Chipstead for almost 50 years. They have brought up five children in the village and been actively involved in St. Margaret’s Church as well as many other aspects of the village community.  Rupert is probably unique in having served on all of the major village institutions and, through acting as the village archivist, has ensured that the village’s history has been preserved.

Rupert, the son of a doctor, was born in 1938 in Kensington, West London. During the war years the family moved to Bourne End, but returned to live just off Kensington High Street in 1945. Rupert was educated at The Hall Preparatory School in Hampstead and then at Charterhouse. He studied Zoology, Botany and Chemistry in the 6th Form and was awarded a place to study medical sciences at Trinity College Cambridge. After three years of hard work (but with some rowing, hockey, squash and the odd beer) he graduated with a BA Hons (later to become an MA). Another three years at St. Bartholomew’s Hospital (Barts) saw Rupert, at the age 24, become a Bachelor of Medicine and a qualified doctor.

While remaining connected to Barts he learnt his trade with a number of postings to different hospitals. The first was as a House Surgeon in Southend, then some pathology at Barts, then some neurology at Addenbrooke’s Hospital in Cambridge, then as Registrar at the London Hospital, then researching lung functions at the Brompton Hospital and then back at the Addenbrooke’s as a Senior Registrar.

It was in Cambridge, in 1970, that Rupert met Pat, also a doctor at Addenbrooke’s. It was love at first sight and within six months they were married at Trinity College Chapel by his friend the Rev. Percy Gray. 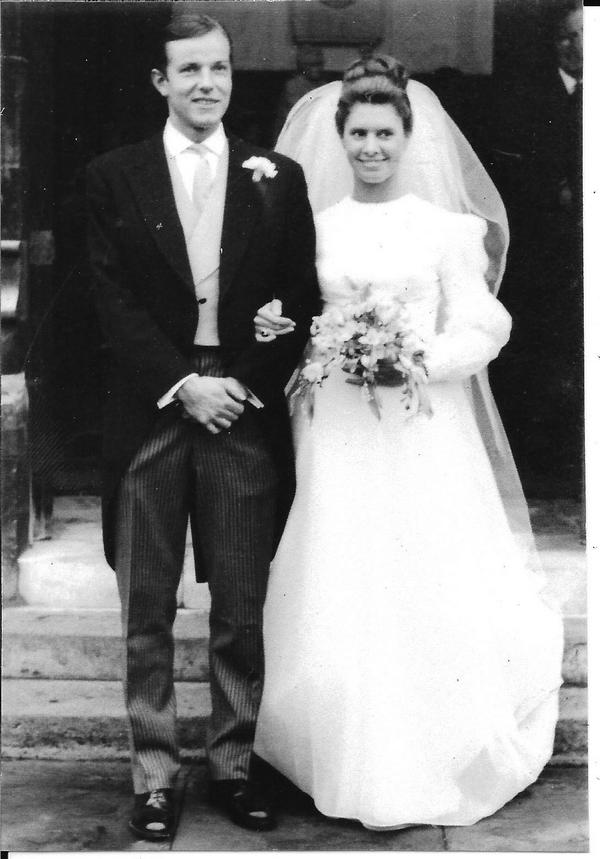 Rupert and Pat’s wedding at Trinity College Chapel, Cambridge in 1970. The ceremony was followed by an old fashioned tea and champagne reception in the college buttery.

Rupert had first met Percy Gray when they both served in the Territorial Army. Having been exempt from national service, Rupert wanted to ‘do his bit’ and joined the TA while at Cambridge in 1964. Captain Courtenay–Evans served for five years as a medical officer mostly with the 289 Artillery Parachute Regiment based in London. However, Rupert did not restrict himself to medical activities; he was a qualified parachutist and survived over 30 jumps. In 1969 he travelled to the Netherlands to participate in the 25th anniversary commemoration of the Arnhem Bridge landings and marched with the regiment from the landing area at Oosterbeek to Arnhem. 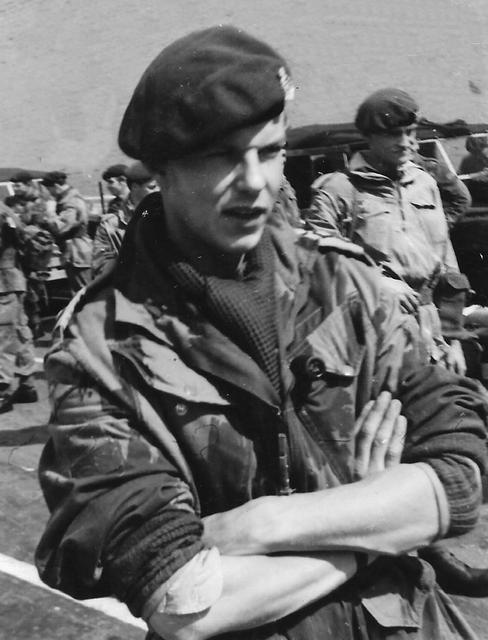 Captain Courtenay-Evans in the Territorial  Army in 1967, at Hankley Common near Godalming in Surrey, for a weekend “ballooning”. Balloons  were used by the TA for parachute jumping from 800 ft.

In 1973 Rupert was appointed as a Consultant at the Mayday Hospital in Croydon. He and Pat, with their young daughter Jane, started to look for somewhere to live in the vicinity. Rupert recognised the name of Chipstead as his brother, who was at school with Rev. John Wates (Hon. Curate at St. Margaret’s Church) had visited the village during the holidays. A drive around the village and a meagre lunch at the White Hart (the pub was notorious for awful sandwiches at the time!) seems to have been enough to convince them to stay and they bought a house called Lissoms Shaw in Rickman Hill Road, then a wooded area accessed by an un-made up road. Mr. Sutcliffe, the estate agent on Station Approach had called the house ‘blighted’ as, at that time, there was still the danger that it would be adversely affected by the building of an extension to the M23 motorway, The Courtenay–Evans family lived under this cloud for several years before, in 1978, moving to Starrock Court on Starrock Lane where they still live today. 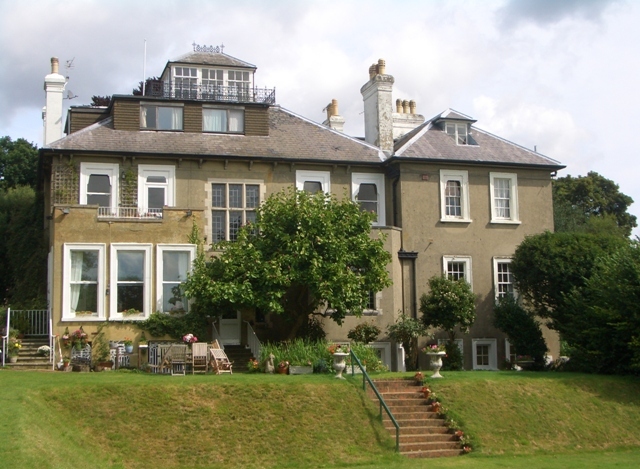 Starrock Court is one of the great Victorian houses in Chipstead.  It was divided into two parts in 1953. Rupert and Pat live in the smaller part on the left of the picture, which includes the belvedere on the roof. During World War One, the family living in Starrock Court could see Zeppelin bombing over central London from the belvedere.

At the Mayday, Rupert was a general physician specialising in respiratory and chest conditions. Despite the long hours and the periodic night-shifts, he enjoyed working as part of a small team of doctors. Inevitably, the organisation changed over time and when it was established as a Trust in 1992, Rupert became the hospital’s first Medical Director while also retaining a clinical role. After normal retirement in 1998 he worked for four years providing medical opinions in the hospital’s emergency department.

Pat, having specialised in gynaecology at Ealing and St. Mary’s Paddington Hospitals, worked in a number of local hospitals. In later years she specialised in addressing infertility,and set up Crawley Hospital’s first Infertility Clinic. Very sadly their first daughter, Jane, was mentally handicapped and required much of Pat’s attention. She was typically positive however, and saw this as an opportunity to have a large family - Tom, James, Nick and Diana followed. Jane sadly died in November 2008. 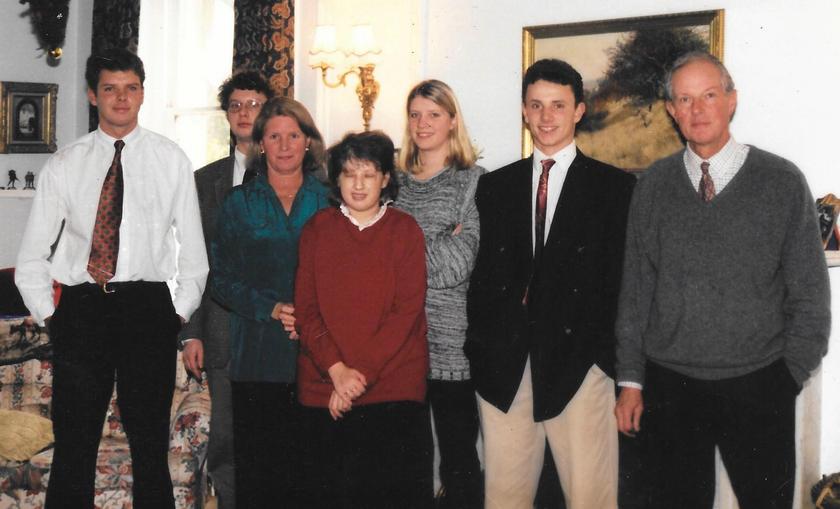 Rupert and Pat with their five children at Starrock Court at Christmas, 2005. From the left of the picture are Tom, James, Pat, Jane, Diana, Nick and Rupert

In 2002 the Mayday was reorganised. It combined with Croydon General and two other smaller hospitals and was renamed Croydon University Hospital. Rupert retired from the hospital at this time, but this opened up new possibilities for the still energetic doctor! One post-retirement job was acting as a second doctor on the Fred Olsen cruise liners. In all Rupert and Pat had five working-holidays on cruises from Tahiti through the Panama Canal to the West Indies and to South Africa, South America and Scandinavia, with the final trip returning from Singapore via the Suez Canal.

His other main activity at this time was serving on tribunals assessing medical compensation claims. This started with considering the impact of diseases such as bronchitis and emphysema on miners’ lungs. When this work, mostly in Yorkshire, finished Rupert was able to use his skills in considering other forms of medical compensation claims as part of the Government Appeal Service.

While a student at Barts in 1960 and 1961, Rupert and a colleague (who had won a rowing Blue at Cambridge) competed in the Devizes to Westminster two-man canoe race, recording times of 52 hours on the first attempt and 31 hours on the second. Covering 125 miles, this race is today considered as one of the toughest endurance events in the world. It was even harder when Rupert did it as much of the canal had not been restored and the canoe had to be carried for long stretches.  This was not to be his only involvement with water as in 1996 Rupert and Pat bought a narrow boat and kept it on the River Wey first at Godalming and then at Pyrford. This barge, and its successor, were to be a source of great entertainment for the Courtenay-Evans family and many boating holidays were taken, including a return trip along the Kennet and Avon to Devizes. 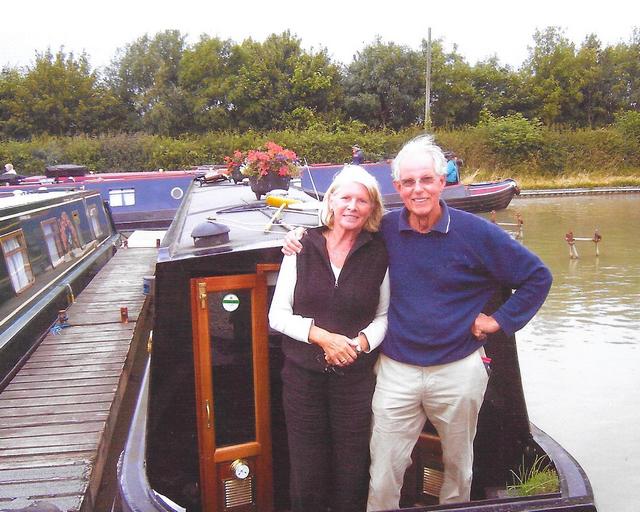 Rupert and Pat aboard their second narrow boat the “Rahere” in 2010. The boat is moored at Napton on the Grand Union Canal in Warwickshire, near their son Tom’s house at Leamington Spa.

In 2012, Rupert was invited to become President of the cricket club at Chipstead (the CCWCC), a post he held for five years. This was mainly in recognition of his support for the club when his sons were playing, especially Tom, who was captain of the 1st XI for several years.

Many people will know of Rupert as the village archivist. This started in 2008 when Madeline MacCallum passed him a box of photographs that had accumulated over the years as part of St. Margaret’s records. With typical enthusiasm, Rupert organised these into a series of albums and enhanced the records by researching the history supporting them. As well as his four main albums there are now a series of lever arch files containing interesting papers supporting the village’s history over many years. Rupert has used his knowledge of the village to organise a number of village tours.

It was inevitable that when, in 2008, the village website was being developed, that he would be involved alongside Barry Pepper, who was leading the website team, in writing its history section. He has also written a number of articles, often about village personalities,that are contained within the Village Archive section of the website. It is very fitting that Rupert’s story should join this collection.