The Brewsters Of Longshaw

Marion and Trevor Brewster have been the most remarkable couple, contributing so much to Chipstead life over the last fifty years.

Marion has dedicated a large proportion of her lifetime to community service, initially serving on the committees of various Chipstead organisations, and later as borough councillor and mayor. Marion continues to help with the flourishing ladies bridge groups.

Trevor was a well loved character in Chipstead, making a significant contribution to the Chipstead Cricket Club over many years, both as player, committee member and club Chairman.

Marion was born in Dundee in 1937.  She was educated at Perth Academy, and in 1956 she began a five year apprenticeship in chartered accountancy in Perth and Edinburgh.

While on holiday In 1961 she met Trevor Brewster, a timber trader with Churchill and Casper`s in the City of London, and they married a year later.  Trevor came from Essex, and they lived there for seven years in Chadwell Heath. 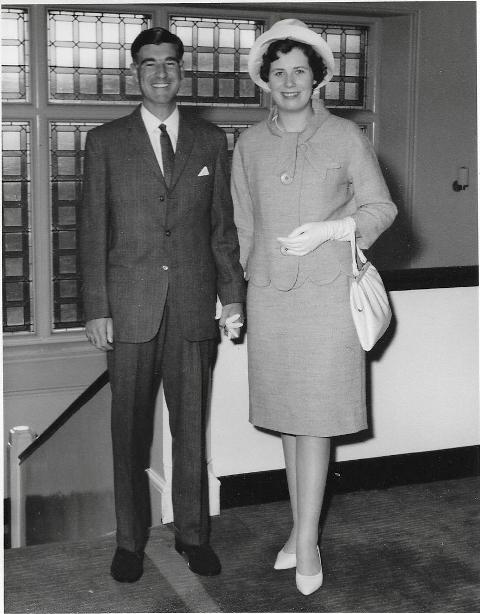 In 1969 they moved to Southwark Cottage on How Green in Chipstead, on the advice of a colleague, as Trevor’s firm had moved from the City to Purley.

In 1971 Richard, their only child, was born. Marion joined the local baby-sitting  group and worked part time. She was also on the local Conservative Committee and the Bonfire Catering Group.

In 1977 Neales Field behind Southwark Cottage came onto the market, at an asking price of £26,000, as the current owner was unable to obtain planning permission to build houses on it.  Marion spoke to the CRA chairman, Bill Parkinson, and a committee, later known as the Chipstead Village Preservation Society (CVPS) was created with Marion as a founder member, to raise the money, which was done with some difficulty.

In the following year Surrey County Council decided to sell Longshaw House and estate in Hazelwood Lane, which had been purchased in 1960 from the Stoddart Trust  as a home for retired ladies.  However, it failed to pass the latest fire regulations.  Marion was still a trustee on the CVPS, as was Len Jarrard, a director of a property/financial company and Chairman of the Chipstead Players. Len wanted to develop Longshaw Stables as their HQ and theatre, now known as the Courtyard Theatre.

The house was developed by the CVPS, divided into eight units and sold unconverted on the open market, mainly to local people, with very long leases, and with the CVPS as the freehold owner. A very complicated operation with eleven contracts, worth a total of £100,000, all signed in one day, was organised by Len Jarrard and the CVPS trustees, which included Marion. The Chipstead Players then proceeded to develop the Courtyard Theatre.

In 1978 Marion, who had joined the Chipstead WI in 1970, decided with Susan Alexander and Revd. Blair-Fish, rector of St. Margaret’s church, to inaugurate an evening WI for working women.  It is now into its fortieth year and very well attended.  She also joined the Flower Arranging Club (now defunct) and the Bridge Club, which was originally started to raise funds for the PA Hall.

In 1997 she retired from work, and the following year was asked to stand as borough councillor for Chipstead, Hooley, and Woodmansterne.  She was duly elected to Reigate and Banstead Borough Council, serving on the planning committee for eight years, which included being holder of the Finance Portfolio.

In 2004 she was elected Mayor, where one of her great achievements was the conception and facilitation of the Elmore Road Permissive Footpath, running from Embers Shaw to Church Green and allowing a safe and picturesque woodland walk alongside Elmore Road. 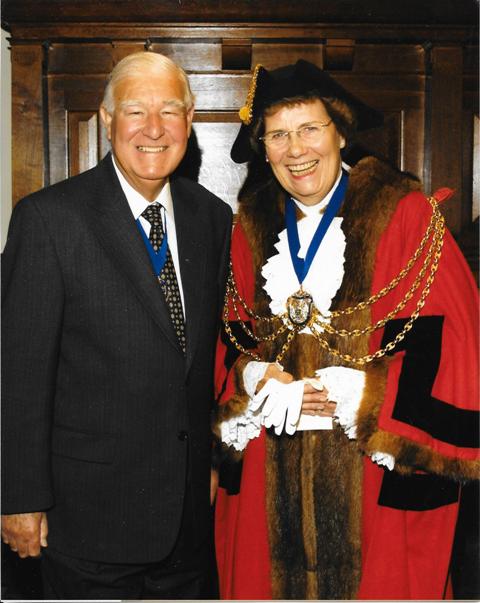 Marion as Mayor of Reigate & Banstead in 2004

Trevor dedicated a lifetime to cricket. He was particularly noted as a fine opening  batsman who had previously had trials for Essex.

After moving to Chipstead, Trevor was impressing people at the Chipstead Cricket Club, not only on the field, from which he retired in 1985, but also later as club Chairman. 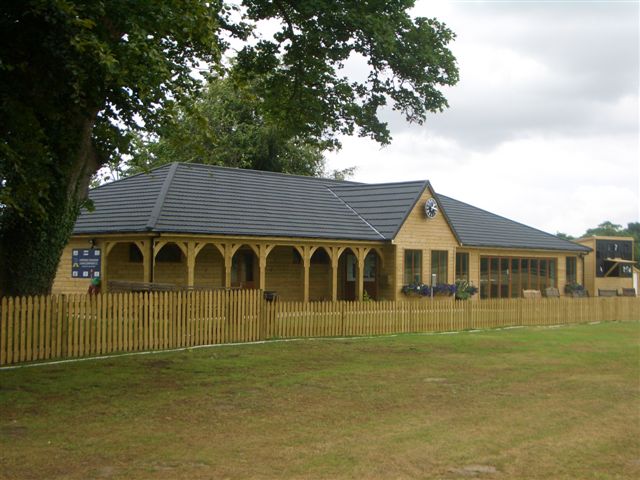 While Trevor was Chairman, he and Denis Woolley tried to set up a second pitch on Chipstead Meads. However, this proved to be impossible without major ground drainage changes.

Trevor was successful in revitalising the Colts section, which has now more than sixty young players, with excellent coaching on Friday evenings.  This has now become a Cricket Academy and one of the most successful clubs in Surrey.  Trevor also masterminded the amalgamation of Chipstead and Coulsdon CC with the Old Walcountians CC, thus becoming the CCWCC and providing a good second pitch, not far away in Woodmansterne.

On Christmas Day 2017, Trevor reached his 90th birthday. It was not celebrated until the 10th of March, 2018 when Richard their son and James their grandson were visiting from their home in New Zealand.  Trevor had a celebratory lunch for 60 at the Cricket Club. Trevor remained an avid cricket spectator, mainly on the TV but when possible at the club. 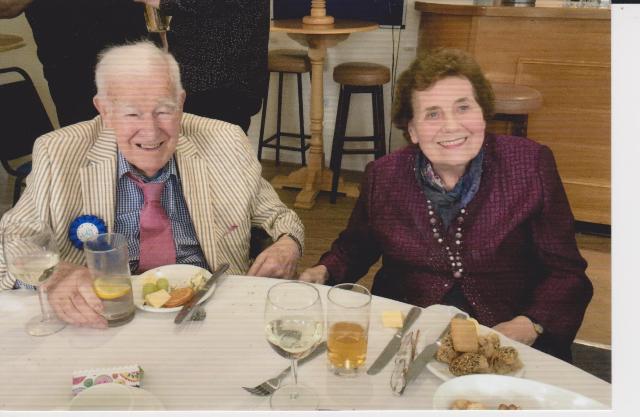 In 2006 Marion and Trevor moved from Southwark Cottage to a flat in Longshaw House. Now Marion has come off all the committees, but is still a keen bridge player. They both enjoyed a well deserved retirement, always welcoming any visitors . 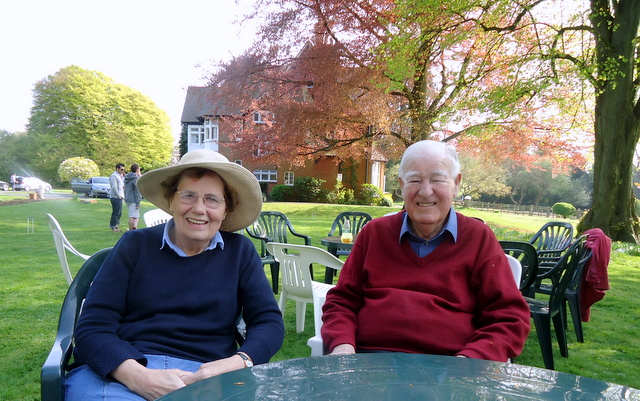 Marion & Trevor in their garden at Longshaw

Sadly, Trevor’s health had begun to deteriorate at the end of 2018, and he passed peacefully away on  29th December at home in Longshaw, lovingly cared for by Marion. On 25th Jan 2019 he had a very well attended funeral at St Margaret`s church conducted by Rev. John Wates, declaring that he had a “ good innings”. His son Richard gave the eulogy for his father, emphasising his sense of humour and popularity with all who met him.

Truly, Marion and Trevor have been the most remarkable couple, contributing so much to Chipstead life over the last fifty years.