The Domesday Book refers to two manors in Chipstead but there is uncertainty as to where they were. This article argues that the smaller one, Pirbright Manor which was owned by Chertsey Abbey, is in the south and east of the parish.The other, Chipstead Manor, is in the north and west.

The first mention of Chipstead is in a Saxon charter kept in the British Museum. This records that in the year 675 five hides of land (about 500 acres) were given by the Saxon Frithwald to the newly established Chertsey Abbey. Frithwald has just conquered this part of the country for the Mercians and was likely to be wanting to placate the Kentish men he had defeated. The five hides of land are next seen in the Domesday Book of 1086 under a section dealing with all of Chertsey Abbey’s holdings. This land subsequently became known as Pirbright Manor.

As a separate entry in the Domesday Book there is reference to a second larger manor in Chipstead, let us call it ‘Chipstead Manor’. This comprised 15 hides (about 1500 acres). Before the Norman Conquest it had been held on behalf of Edward the Confessor by the Saxon Wulfnoth but was now one of the many properties held by the powerful Norman baron Richard of Tonbridge.

The measure of a ‘hide’ was an economic value rather than a fixed amount of land. As such it is quite imprecise but is approximate to 100 acres. This would mean that together the two manors made up about 2,000 acres which is about the area of the Parish of Chipstead before changes to it were made in the twentieth century.

Today we do not know which part of the parish was Chipstead Manor and which Pirbright Manor. The purpose of this article is to explain why I believe that Pirbright Manor was some, or all, of the green area in the map below and was made up primarily of Pirbright Farm and Gatwick Farm as shown in the 1847 Chipstead Parish Tithe Map together with Noke Farm which, by 1847, had been acquired by the Shabden estate. The remaining land, shown in yellow, was I believe Chipstead Manor. 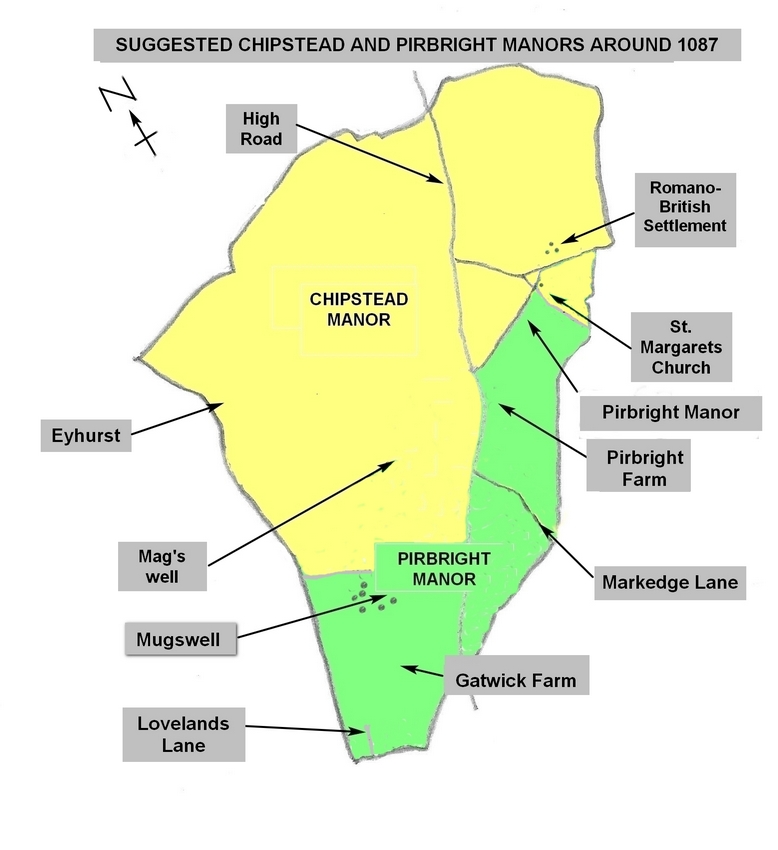 The rationale in support of this is as follows:

Aspects of my analysis where there is a degree of uncertainty include:

One of the great attractions of history is that we can rarely be certain about events and circumstances in the distant past. However, clues often remain upon which people can build theories. Hopefully my proposition that the location of the land given to Chertsey Abbey in 675 can be broadly equated with the area covered by the Victorian Pirbright and Gatwick Farms and the earlier Noke Farm is not too wide of the mark. If I am correct the ancient link with Chertsey Abbey will be to the area around the village of Mugswell rather than what we now think of as the village of Chipstead.