Many of us will know Brian and Sheila Eades. Sheila worked for many years “behind the counter” mainly for newsagents/post offices at the former shops in High Road and currently at the Corner Shop in Station Parade. Brian finally became a garden machinery mechanic with a workshop in Kingswood mainly undertaking lawn mower maintenance and repairs for many customers in Chipstead. Brian and Sheila’s story is a true Chipstead epic spanning almost 100 years. 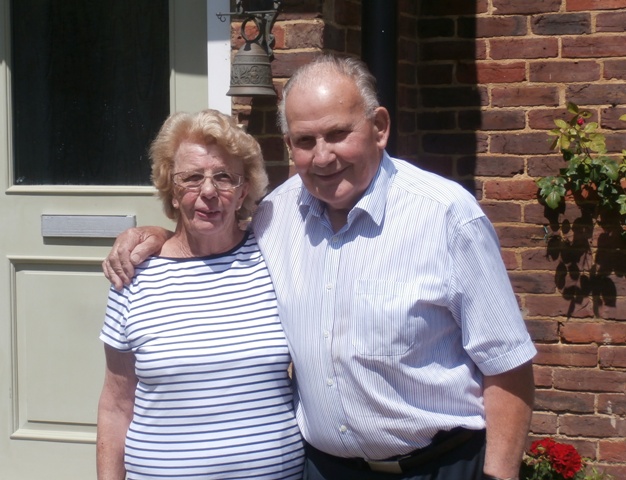 Brian & Sheila outside their home in 2016

Brian`s maternal grandparents, Jessica and Ernest Northover, first arrived in Chipstead around 1925 in a residential/general purpose horse drawn van, which had a small living area for their expanding family. At that time there were four children one of whom was Brian’s mother Ivy, who had been born in the van somewhere in Wiltshire during the early years of the 20th century.

The reason for coming to Chipstead was that Ernest had been given work on Lord Marshall’s Shabden estate, and was instructed to clear the Long Plantation which had become very overgrown. He started at the southern end of the plantation which abuts onto White Hill, and found a fairly level section of land there to park his van. However, Lord Marshall had previously agreed that they could live in nearby Mugswell in Parson’s Cottage on Parson’s Green while he was working in Chipstead, particularly since Jessica was expecting twins. 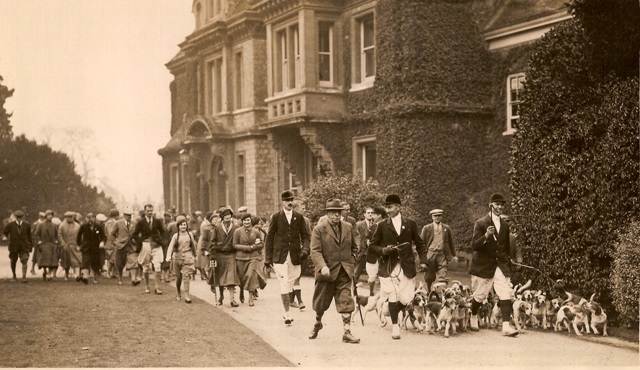 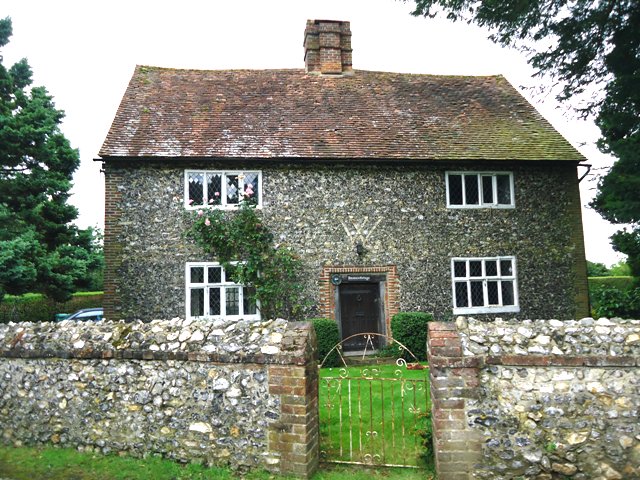 Most unfortunately for the family, Ernest became involved in a dispute with one of Lord Marshall`s daughters, Lady Gwendoline, when he failed to pull his van over to allow her to ride her horse by in comfort on White Hill, or to pay her the appropriate respect as required by the etiquette of the time. This was duly reported to her father who promptly sacked Ernest and evicted the family from Parson`s Cottage.

Lord Marshall died in 1936, leaving his Shabden estate to the London CC and to Surrey CC and it was one of the first areas of Metropolitan Green Belt. Shabden was subsequently used by Surrey CC as annexe to Epsom Hospital with a children`s ward. 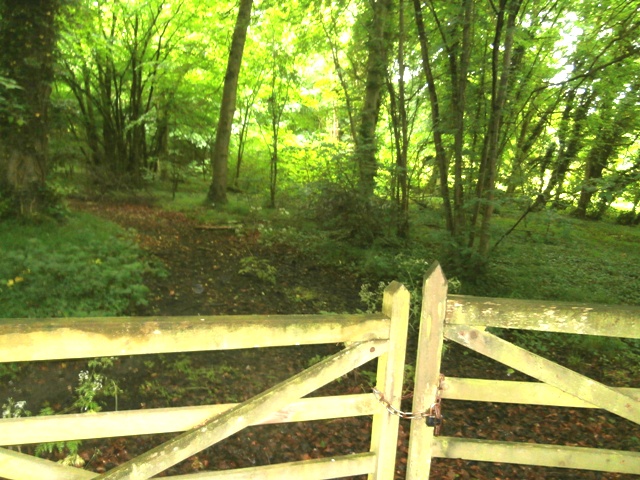 The Northover family moved back into the van, which was still situated in the Long Plantation. By now the twins were expected and the local midwife, a young nurse Smith, was involved. She had never delivered twins before let alone in a caravan in the back of beyond, so she asked Mrs Peggy Stepney, a mother of eight, to assist her at the delivery. Happily, all went well and Len and Ernest Northover were born uneventfully in 1925. 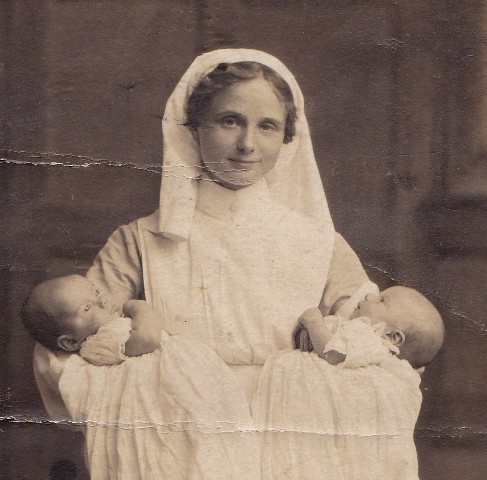 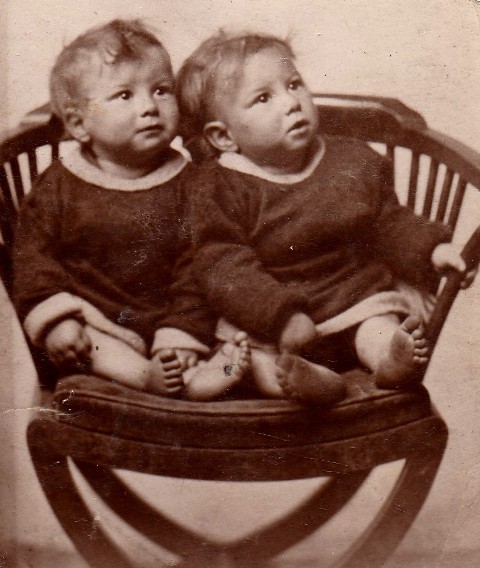 In spite of everything, the family still liked Chipstead, so they decided to move the van down to a plot under the railway viaduct in Outwood Lane (now the Brita Fuels coal depot) when Ernest had got a job with the local council and the railway company which involved removals, rubbish collection and tree lopping. This situation was not ideal as the site was always wet and the family, seven in all by now, had outgrown their tiny living area in the van. Luckily, the local council had plans at that time to build eight houses just along Outwood Lane opposite the Old School House, and in 1930 the family were housed in the first house finished, which was No. 8 The Cottages. 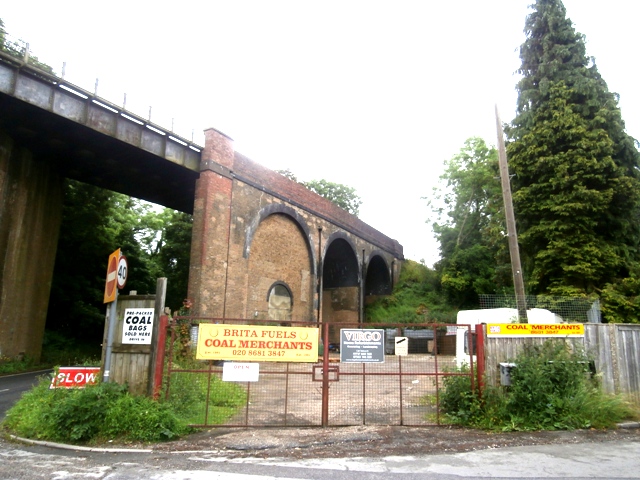 By now Brian`s mother Ivy had met her future husband Ted Eades, a Londoner, who was working at the “Red Lion” pub (now Aldi`s supermarket) in Coulsdon. He was 20 years older than her and had been wounded in World War 1 when the famous British passenger liner “Lusitania” was sunk by a German submarine off the Irish coast in 1916. This event was partially responsible for bringing the USA into the war, as she carried many American passengers, as well as a large quantity of munitions, bound for the British war effort (a claim often denied at the time). Ted was one of the few survivors.

After a brief period in a flat in Coulsdon, the newly married Ivy and Ted Eades moved into No. 5 The Cottages in Outwood Lane, next to Ivy’s parents. They had one son, Brian, born in 1931 and two daughters. 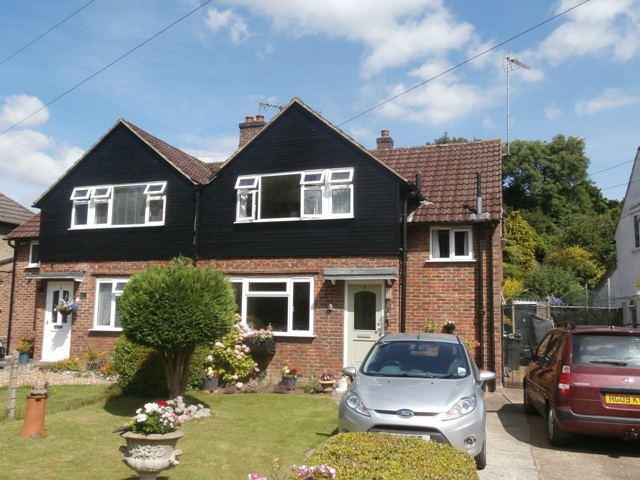 Brian & Sheila’s home at No. 5 The Cottages in Outwood Lane

Most of the Northover boys signed up for the army during World War 2 and after the war Len Northover, one of the twins who had a distinguished army record, married a local Mugswell girl Jean, who still lives there in Green Lane, and is now the oldest inhabitant. Len died a few years ago.

Brian went to Chipstead School in High Road, always walking there through the fields. During World War 2 when he was 8, he had a serious dog bite and was seen by the same Nurse Smith who had delivered his uncles, and who lived near the school in Nightingale Cottage. She felt the bite was bad enough to need admission to Shabden Park children’s hospital. Brian was then evacuated to Wales to escape the bombs in Chipstead, but was ill treated there so he returned to Chipstead and went to Chipstead Valley School, then a secondary school, which had been machine-gunned by a German plane earlier in the war.

Brian did not avoid the blitz altogether and spent many hours in their Anderson shelter. He remembers many bombs falling, with his front door being blown off on one occasion. The biggest explosion was in 1944 when a V2 rocket fell in the fields beyond the Old School House opposite, creating a crater the “size of a house” Margaret Marshall, who lived at the Old School House, was actually only 200 yards away in her garden at the moment of impact, but was not hurt. The V2s were Hitler`s last surprise of the war and thankfully only lasted a few months before their factories were knocked out by the advancing allies.

Chipstead and Banstead were full of Canadian troops at this time, all waiting and training for the Invasion of France in the Spring of 1944. Brian remembers playing with the Canadian troop’s guns and practice grenades in return for introducing them to some of the older girls in the village – two local girls got married to Canadians!

Brian`s mother Ivy managed the former tea rooms at Dean Farm (now the Rambler’s Rest pub). She also had a cafe on the site under the railway arches in Outwood Lane where her father Ernest kept vehicles. The family also had an allotment in the field over the road near the Old School House, where they kept chickens. The children all helped when and where they could.

Brian left school at 14 and first got a job making surgical instruments - but it was thought he should have a more healthy, outdoor job. So he trained as a gardener and garden machinery mechanic and first worked at Redhill General Hospital. He then became manager of outside offices at the NHS Kingston Group. He then retired from the NHS and set up on his own, and had a workshop for mower repairs in Kingswood. He married Sheila Phillips in 1961 and they took over the family home at No. 5 The Cottages in Outwood Lane, where they have been living ever since.

Sheila`s great grandfather, William Phillips, built the former village grocers and drapers shop in High Road in 1885. This date and his initials are still on the front of the building. He and his son, also William, worked there until the 1920s. 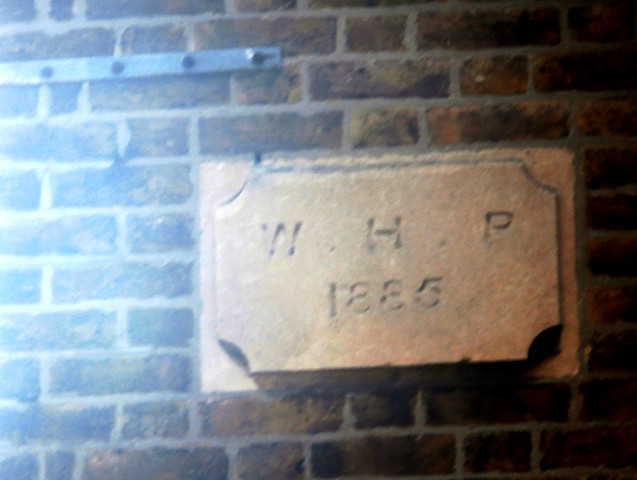 The younger Mr Phillips, Sheila`s grandfather, lived in Vincents Cottage in Starrock Lane but his son, Sheila`s father James, had not wanted to work in the shop which had been taken over by the Alford family. So he went to live in Thornton Heath, and got a job with KLM Motors in Coulsdon. There he met his wife and initially lived with her family there, where Sheila was born. However, in 1940, when the blitz began and Croydon was bombed badly, the Phillips family decided to return to Chipstead where they lived at No.  2 Gatefield Cottages in High Road. James continued to work for KLM Motors and was in the local Home Guard.

Sheila went to Chipstead School and then to Chipstead Valley School and when she was 14 she went to work at her grandfather’s old shop, by then a grocers shop and Post Office, run by a Mr Hurst. Later he sold the shop to Forest Stores and then to Fine Fare but he carried on running it. Sheila continued to work there until 1969. 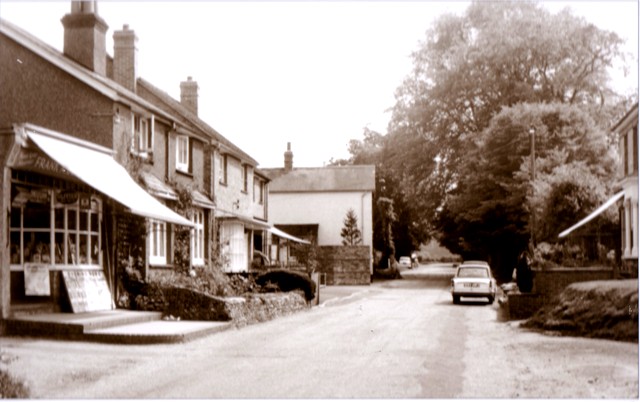 Chipstead High Road in 1963. Sheila’s great grandfather’s village grocers and drapers shop can just be seen on the right. Frank Butcher’s newsagents is on the left

Meanwhile the newsagent across the road had been run by Mr and Mrs Frank Butcher since 1933, and their daughter and son-in-law, Dennis and Shirley Murphy took over running the shop in 1961. They had 3 children - sadly Graham, the eldest died in 2016 and had a memorial service at St Margaret’s church.

The Murphys sold the newsagent to Mr and Mrs Tye in 1969 who took over the Post Office as well. Then Sheila  left the grocers to work for the Tyes. Meanwhile, Sheila Murphy went over the road to help running the grocers, which after a time began to lose customers to the new super-markets in Coulsdon and Banstead. Itfinally closed in 1990, selling the site to Roy and Denise Comber who ran it to as an antique furniture shop plus a workshop for Roy to carry out furniture restoration. The Combers left in 2005 and the old shop became a private house and the workshop a separate cottage. 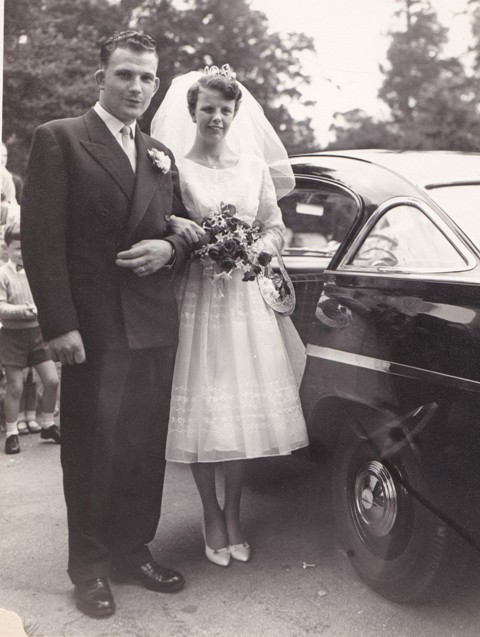 The grocery business had been transferred to the newsagent/post office which changed hands several times, but never prospered and finally closed in 1995 when they lost the Post Office business. It was then converted into a private house. Sheila stayed with the newsagents/post office until 1990 when she moved to work for George Jones at the Corner Shop and post office in Station Parade, where she still regularly helps Kiru, the current owner.

Brian and Sheila still live at No 5, The Cottages and they sleep in the same room where Brian was born! Brian still does a bit of gardening for a local doctor, as well doing his own garden. They have a motor cruiser on the Wey Navigation canal, and enjoy waterborne holidays on England`s oldest man-made waterway.

A truly fascinating  couple  who are still going strong and from whose life histories we have learnt so much about Chipstead over the last century and longer.