Andrew Britton is very well known to the congregation of St Margaret’s and anyone connected with the Church.

His popular monthly sermons at the 9am service and many articles in the Church Magazine, all have an easily understood central theme, but his peripheral discussion is open to deeper thought, and can be differently interpreted by different people.

Andrew suggests this is part of the art of journalism and keeping interest up during sermons, which incidentally he feels should usually be kept to a maximum of about 15 minutes for adults and only 5 minutes for children.

Andrew is a lay Canon at Southwark Cathedral, as he was Chairman of the Diocesan Board of Finance from 2000 to 2007, thus becoming ex-officio on the Diocesan Synod. This Board is responsible for the payment of the clergy, also their pensions and upkeep of the vicarages. His effectiveness in this role must have been noted by the Archbishop, as in 2007 he became Chairman of the Finance Committee of the Archbishops` Council and a member of General Synod, a position that he still holds.

He is, however, also a Reader in the Church of England, and has been since 1986, hence his ecclesiastical role at St Margaret’s. This was the position that he arrived with in the year 2000, when he and his wife Pamela moved into Shabden Park, having previously lived in Wallington where they had been members of the “Church of the Good Shepherd” in Carshalton Beeches for 30 years. His position as Reader allows him to preside at most services except Holy Communion, both at St. Margaret’s and the Mission Hall in Mugswell.

As Andrew may not be quite so well known to some, I am going to outline his interesting career.

He was born in Swansea in 1940, the son of a Professor of Philosophy. They moved to Newcastle on Tyne in 1951, where Andrew went to the Royal Grammar School. He then went on to Oxford to read history and it was there he met Pamela, who was reading Politics, Philosophy and Economics. She went on to be a solicitor in Epsom specialising in probate, trusts and wills.

After a short spell in publishing, he decided he was more interested in economics and was awarded a Government bursary to go to LSE to read for an M.Sc, which he duly got with a distinction; this lead on to a post at the Treasury, where he specialised in macro-economic forecasting and rose to be an Under Secretary.

He left this job after nearly 14 years and then became Director of the “National Institute of Economic and Social Research” in 1982. This is an independent academic research organisation looking into matters such as “the effect of education on our economy” and our comparisons with other European countries. He stayed in this post until 1995, and was then appointed to head up a church enquiry into “Unemployment and the Future of Work” which was being organised by David Sheppard, then Bishop of Liverpool.

In 1997 he formally retired but continued to teach at Bath University. He also wrote two books entitled “The Monetary Regimes of the 20th Century” and “Economic Theory and Christian Belief”. After this, his life was occupied by diocesan duties and he and Pamela had time to look for a more countrified place to live in; they decided on Chipstead, where they had spent many happy days walking the footpaths, and still do.

It seems that there were not many properties available at that time, until they found their current home in part of the historic Shabden Park house. This is a lovely place with large rooms and elegant Victorian wood panelling everywhere and amazing double aspect views over the rolling Downs to the west and south of the Shabden Valley, where Andrew still jogs to keep fit.

Apart from his ecclesiastical duties, which also involve coordinating the yearly Christian Aid Appeal here, he and Pamela have three daughters and nine grand children who all live in near-by Sevenoaks and whom they see frequently. (They have a full size table tennis table in a part of their drawing room!). They are also both members of Nadfas and supporters of the Chipstead Players and Pamela is in the evening WI.

Andrew strongly believes in the provision of facilities for children to come to church with their parents and independently learn about Christianity, particularly as so little is taught at school nowadays, hence his support for the new Junior Church, which is now nearing completion. I asked him if efforts like these were being reflected by increasing church attendances generally and he felt that they were, especially in the London area, but less so elsewhere and congregations still tended to be mainly of the older age groups.

We agreed that Chipstead is remarkable for the various activities that it provides for children particularly at weekends, not only in the church, but also at the rugby, cricket, soccer and tennis clubs, as well as at the Courtyard Theatre, even though many of them don’t actually live in the village. 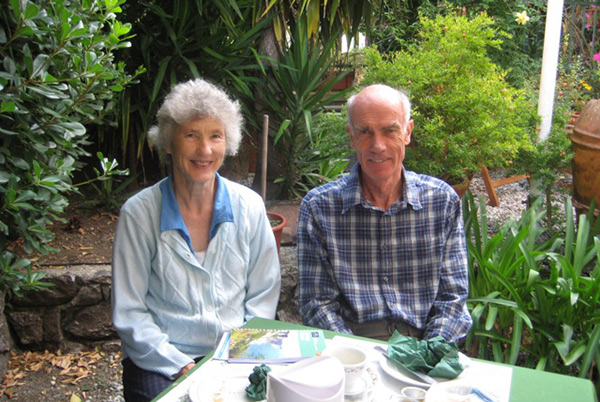 Andrew and his wife Pamela at home

Finally I would like to thank Andrew for his help with writing this article and also to thank Andrew and Pamela for inviting me to see their home and parts of Shabden Park I had not seen before.